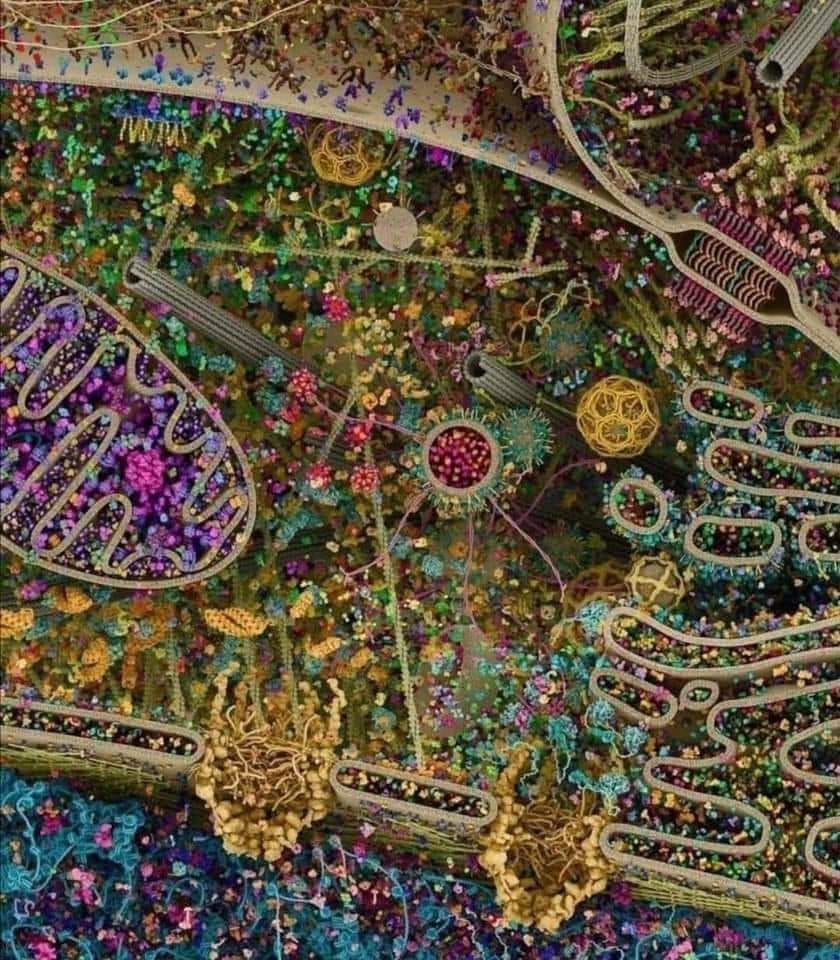 Human Cell
"This isn’t a painting. It is the most detailed image of a human cell to date, obtained by radiography, nuclear magnetic resonance and cryoelectron microscopy."
(click to enlarge) 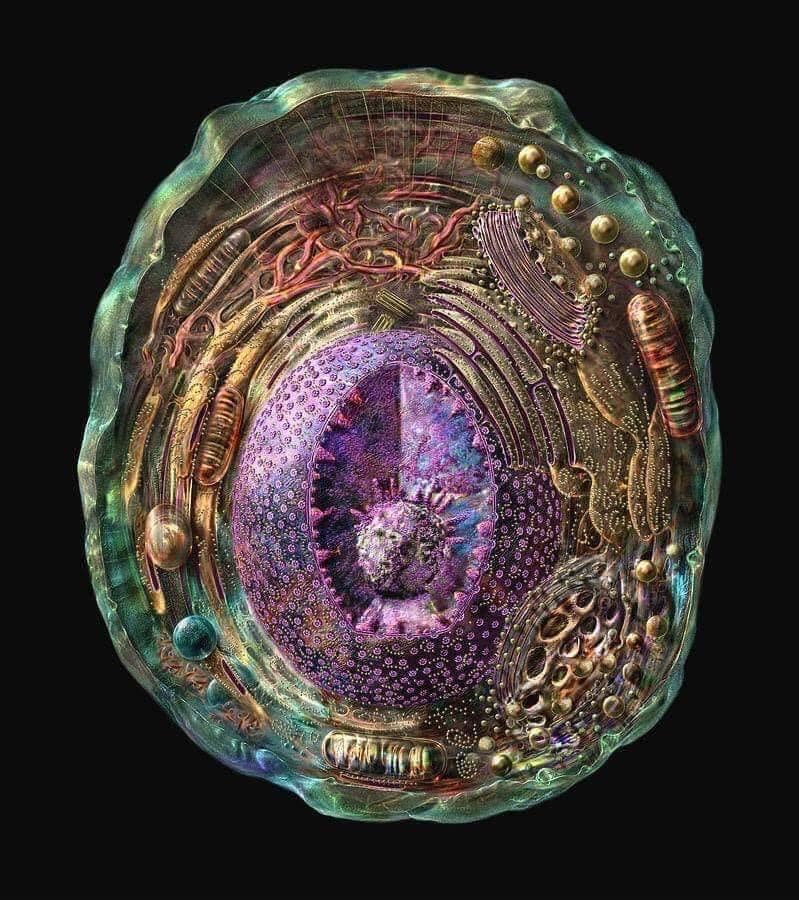 (click to enlarge)
The most detailed representation of a human cell to date, obtained from radiography, nuclear magnetic resonance and cryoelectronic microscopy. Painting by Russell Kightley 2012.

Schauberger
As a negatively supercharged trace-element, uranium is present in all cells, which also explains the decay of cells and tissues normally referred to as cancer. In the forest this is manifested in the enlargement of the annual rings in over-illuminated, shade-demanding species of timber. Thus is also revealed the cause of the huge spread of the scourge of the technical age - cancer, whose actuator comes to life in decadent cells through over-acidified food, in drinking and cooking water, and in air polluted by exhaust fumes. Here too we encounter tree-cancer, to which these decadent cells give rise and which is transferred to the tree by over-acidified nutrients. Iron molecules are particularly dangerous, if they are swept up into the atmosphere along with the fumes from iron-smelting blast-furnaces, for as catalysts they contribute to the interaction between low-grade elements and inaugurate conditions conducive to lung cancer. [The Energy Evolution - Harnessing Free Energy from Nature, The Biological Vacuum - The Optimal Driving Force for Machines]

(d) To the heating and cooling of living spaces with the aid of allotropic mineral elements through the intensification of the repulsive power and performance of expansive substances (the radiation of stocks of basic elements from selenium cells. With slight stimulation these produce reactive forms of temperature, which indirectly result in a form of cooling that acts from below upwards and a diffuse form of heat that acts from [The Energy Evolution - Harnessing Free Energy from Nature, The Practical Application of Cycloid-Space-Curve-Motion arising from Processes of Cold Oxidation]

Metabolism
noun: all the chemical processes by which cells produce the energy and substances necessary for life. Food is separated (dissociated) into the parts it is made up of to produce heat and energy, to repair tissues, and to help growth to happen.
noun: the organic processes in a cell or organism that are necessary for life
noun: the marked and rapid transformation of a larva into an adult that occurs in some animals

Metabolism ("change") is the set of life-sustaining chemical reactions in organisms. The three main purposes of metabolism are:

(1) the conversion of the energy in food to energy available to run cellular processes;
(2) the conversion of food to building blocks for proteins, lipids, nucleic acids, and some carbohydrates;
(3) and the elimination of metabolic wastes. [Metabolism]

These enzyme-catalyzed reactions allow organisms to grow and reproduce, maintain their structures, and respond to their environments. The word metabolism can also refer to the sum of all chemical reactions that occur in living organisms, including digestion and the transportation of substances into and between different cells, in which case the above described set of reactions within the cells is called intermediary (or intermediate) metabolism. [Metabolism]

Cayce
"The healing must come from within - that is, life force - or cell units - must build within, or from within, in such a way and manner as to bring resuscitating life energy through the whole system." [Cayce 5440-1]

Christ Returns - Speaks His Truth
"I had already 'seen' the reality of the physical bodies composed of various communities of identical 'infinitely tiny entities' working in a spirit of co-operation and harmony to produce the various components of the body - flesh, bone, blood to eyes and hair.
The only difference between these communities lay in the type of work demanded by their common goals. Surely the DIVINE IMPULSE behind all this intelligent, purposeful activity in the body, was both the inspiration and foundation of man's own conduct when people worked in unison to produce a planned objective? They drew intelligence and purpose from the Creative Power yet how very different was man's behaviour when engaged in earthly construction or any other communal project for it was inevitably characterized by arguments and dissension." [Christ Returns - Speaks His Truth, Letter 1, page 15]

9. The inherent characteristic of the Loving Intelligent Creative Power was LAW & ORDER.
The undeviating order and reliability apparent in creation, even governing the tiny entities ('cells') within the body, were astonishing and far transcended any human endeavor. Therefore, the entire universe was operating under a system of perfect LAW & ORDER.
I realized on ever higher and higher levels of spiritual exaltation that the 'creative power' exhibited intelligent purposefulness and loving concern for all living things. I realized that life was not something nebulous or amorphous but an intelligent loving creative power which I could actually feel within myself as a tremendously heightened state of being, perception, radiance, ecstasy, joy, love. I knew myself to be one with it - filled with it - and I was one with everything around me and one with the sky and stars.
And - most wonderful and glorious of all - the very 'Nature' and 'Function' of this 'Father - Creative Power' was to work in order to create joy, beauty, and comfort to ensure mankind's well-being, to work within mankind to provide interior joy, health and comfort, and to work through mankind, inspiring him with new realization and understanding.
Wonderful vistas of glorious creativity came to mind. Once we became truly 'at one', purified channels and instruments of the 'Intelligent Creative Power', we could gradually ascend in consciousness until we truly expressed through our minds and hearts the very 'NATURE' of the 'Universal Creative Power'.
Then 'life on earth' would indeed become a 'state of heaven' at all times and we would enter into a state of eternal life! [Christ Returns - Speaks His Truth, Letter 1, page 15]

Michael Crichton
"Think about oxygen. Necessary for life now, but oxygen is actually a metabolic poison, a corrosive gas, like fluorine. When oxygen was first produced as a waste product by certain plant cells some three billion years ago, it created a crisis for all other life on earth. Those plants were polluting the environment, exhaling a lethal gas. Earth eventually had an atmosphere incompatible with life. Nevertheless, life on earth took care of itself." [Michael Crichton]