God's thinking is universal. His actions spring from His thinking, therefore, God's actions are universal. Thoughts do not take place just here, or there, where they begin. They are everywhere, and their beginning and ending are one.

Actions, likewise, are as Omnipresent as their Source in Mind-thinking. That which happens anywhere happens everywhere in this universe of naught but Mind-extension.

Idea has no extension, but idea, divided by imagining, extends into an imaged infinity, and repeats its divisions like unto the infinity which the kaleidoscope repeats, and multiplies its imaginings as it repeats.

When God thinks at any one point of rest in His universe, that point becomes the center of an invisible cube of White Magnetic Light. From there it is harmonically repeated as cube centers throughout His Cosmic Kaleidoscope, at the rate of several hun-

dred billions of cyclic pulsations every second. Their speed of extension into this three dimensional illusion is about 186,400 miles per second.

Radical expansion of beginning points compress motion into cube planes of rest in space. These are reflecting mirrors of Magnetic Light which project God's thought-imaged forms onto His universal screen of space to simulate a reality of existence where not anything is, not even the motion which so convincingly seems to be there.

Invisible cubes of Magnetic Light, and of zero curvature, are the boundings of wave-fields within which the curved universe of reflected spherical forms are projected to constitute this electric thought-wave universe of complex illusion.

God begins each electric thought-wave at a point of His White Light at the intersection of the three inner planes of the cube, which are at right angles to each other. This point of beginning is the wave fulcrum. It is also the point of idea-conception in Mind. It is the centering eye of the inert gas of the elements which springs from that plane. It is, likewise, the cathode center of man's electric current and the beginning of the wave-shaft which extends two ways to divide the red half of the spectrum from the blue, to create separated father and mother bodies. Here also is where time and all other dimensions begin, as well as all other effects, such as life, compression, polarization and heat. Here also is where all depolarizing dimensions and effects 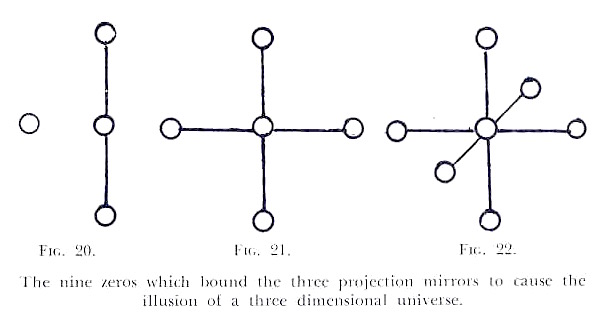 The nine zeros which bound the three projection mirrors to cause the illusion of a three dimensional universe.

end and disappear into invisibility, silence and cold stillness of space. 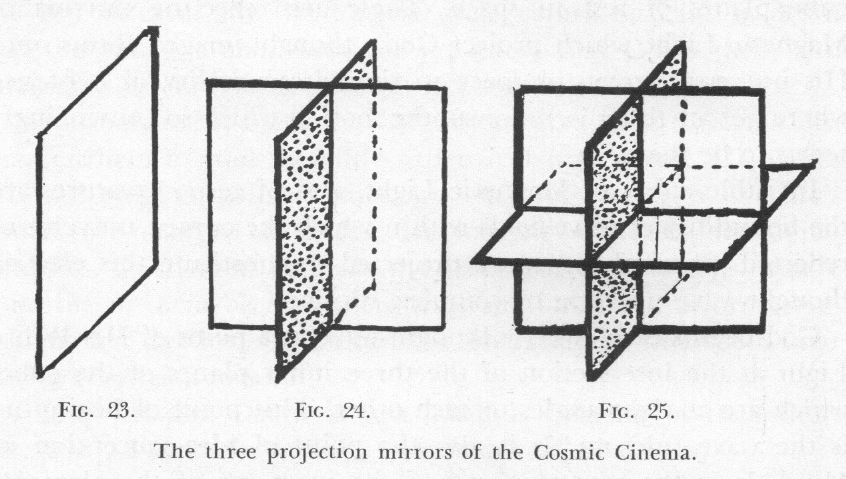 The three projection mirrors of the Cosmic Cinema. 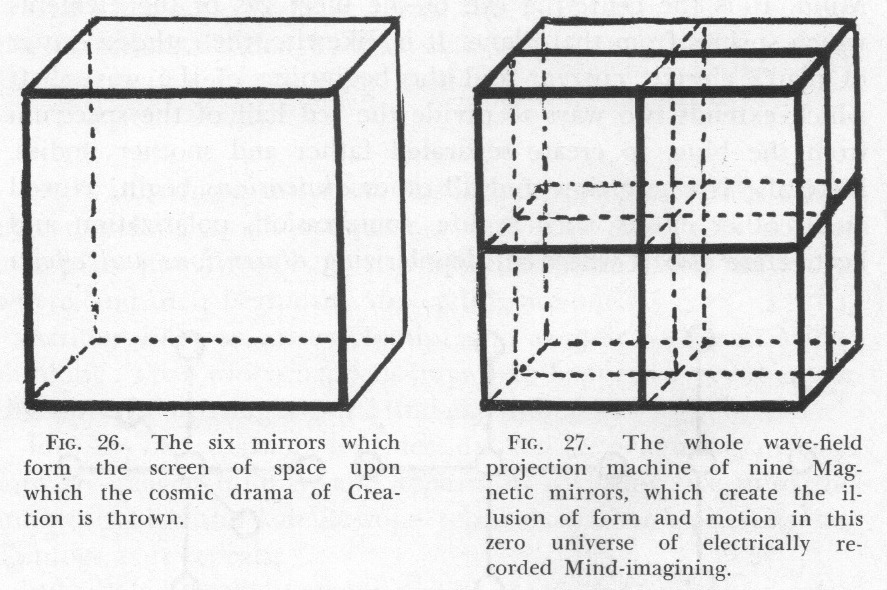 Fig. 26. The six mirrors which form the screen of space upon which the cosmic drama of Creation is thrown.
Fig. 27. The whole wave field projection machine of nine Magnetic mirrors, which create the illusion of form and motion in this zero universe of electrically recorded Mind-imaging.

pair at His thought wave amplitude. This united, balanced pair is an incandescent sphere. At that point in the wave, and that only, the disunited father and mother unite as ONE at its white 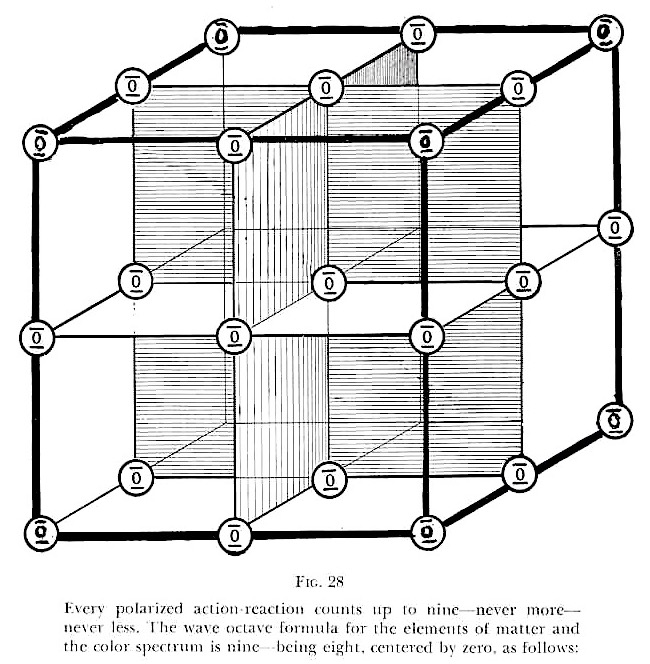 Every polarized action-reaction counts up to nine – never more – never less. The wave octave formula for the elements of matter and the color spectrum is nine – being eight, centered by zero, as follows:

upon which our decimal system is founded. 1. The total count of equators is nine. 2. The eight corners of the cube, and its centering zero, equal nine. 3. The eight sections of the divided cube, centered by zero, are also nine. 4. The zeros upon each of the nine equators total nine, being eight centered by zero.

center. One of its hemispheres, however, is still the red light of the father and the other one is the blue light of the mother; for each is still extended from its centering Oneness.