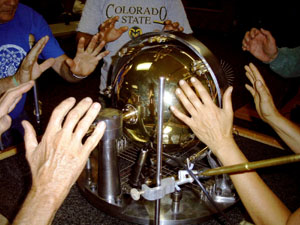 Atlin is the name of the first Dynasphere we constructed during the winter of 1995-1996. Dynaspheres, sometimes called Musical Dynaspheres, Globe Motors or Sphere Motors, were originally built in the 1870s or 1880s by John W. Keely in Philadelphia. (See Keely and his original Globe Motor.) They were made as a power source to drive industry. In those days there was only wind, water, steam and animal power. Eventually Nikola Tesla's system of AC power won out with powerful backing by George Westinghouse. When Keely died in 1898 all of his research and writings and nearly all of his machines disappeared. It is theorized JP Morgan and especially Andrew Carnegie did whatever was necessary to wipe Keely out of history. There are precious few traces left indicating he even existed. With these dynaspheres Keely was able to power different work loads and demonstrated a larger unit four feet in diameter built to power a locomotive. The dynasphere you see pictured throughout this web site is one I made (with a hand-chosen research team) in the winter of 1995-1996 as my effort to rediscover Keely's lost science and technology. These unique devices are not so-called perpetual motion machines, which are impossible. We may call them continuous motion machines much like a water wheel made to move continuously by an ever passing stream of water. A water wheel will rotate continuously as long as the water flows and it holds itself together. The dynasphere is designed to operate within the stream of vibratory energies passing to and from the earth and in conjunction to those vibrations of the "celestial" domain. See SVP Cosmology for details. A dynasphere is a fractal both of the earth and of atoms each of which rotate continuously without end. They use neither chemical or other expensive fuels and are completely non-polluting. Is an atom or a rotating planet a perpetual motion machine? Of course not, but they are continuous motion. see What is a Dynasphere

"The Dynasphere could provide a workable power source for Etheric Force generation that would 'do work' and improve human kind." Dawn Stranges, 07/27/2011 see Light, What electricity is - Stranges


Keely harnessed Mind Force in his devices and machines:

"Will force is a latent, spiritual element, neither gaseous nor otherwise. Its evolution is brought into action under certain spiritual conditions not now understood by science. Its protoplastic element is actually luminous, in respect to its latent flow from the cerebral domain; but all the flow that has ever been registered from the time of the birth of every volume of thought - all that ever existed, or will ever exist in the future - would not produce a substance of matter the size of a molecule." Keely


Personal Tuning
Usually as the dynaspheres are built they are in sympathy (tuned) to myself as I am handling the parts. During this construction period there is also a spiritual connecting link between myself, the owner and the dynasphere parts and entity coming into being. This sympathetic connecting link during construction accounts for a portion of the personal tuning to the new owner. This is something that goes on within the higher levels of spirit and consciousness. Each dynasphere then becomes a mechanism or help-meet for the new owner to attain or accomplish his/her own purposes which may or may not be consciously known at that time. From our experience they all seem to be perfectly suited to that new owner and their purposes whether it is working with self awakening or with others in therapy, spiritual growth or healing. [Dale Pond] [See Atlin Purpose]

SVP Videos
Symael
Testimonials
What is a Dynasphere
4.4 - Idle Wheels on Natures Machinery
7B.13 - Mind Force in Machinery