Sympathetic Vibratory Physics » The Odic Ray - Its Origin and Nature

The Odic Ray - Its Origin and Nature

The Odic Ray - It's Origin and Nature
By EDGAR L. HOLLINGSHEAD

We'll bet a worn out shoe horn that we could make a fortune with an Odic Ray outfit by training its rays on a drug store scale and then inviting the overfed public, worrying about its weight, to find a weight it desires. Imagine the dowager of 200 weight finding that she tips the scale beam at a paltry 135. But, seriously, folks, Mr. Hollingshead has developed something in his laboratory which staggers the imagination - and our imagination is accustomed to lots of staggers at that.

SOME years ago I became convinced that matter did not depend upon physical properties for its weight, but upon the speed of the atoms making up the molecules, and I began searching for a process by which a force could be generated that would be high enough in point of speed to change the atomic speed of matter. Knowing that it would be impossible to release or generate such a force out of any form of matter, I turned my attention to the study of the nature of electricity and other natural forces.

Believing that man could not conceive of a force unless there were something moving, I therefore believed that all forces must be made up of substance in motion. The substance that forms the natural "body" of forces or so-called laws of nature is not matter in the sense that the term is ordinarily used, but a substance so fine and vibrating at such a high rate of speed that it cannot be comprehended by any faculty of man excepting his reason. Thus considering the nature of electricity, reason tells us that we must have a substance traveling at a very high rate of speed, and that this substance must be governed and controlled by the same principles that govern all substance or matter. There must be one general principle governing the formation of substance throughout the universe. In other words, the substance or body of electricity, termed "amperage," must be made up of infinitely small eddies of force, - the same as ordinary matter is. 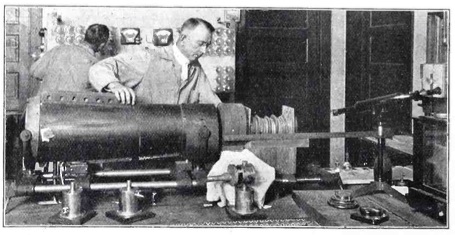 EDGAR L. HOLLINGSHEAD, INVENTOR, IS HERE SHOWN PETTING HIS MASTERPIECE WHICH, IF HIS THEORIES AND CLAIMS PROVE TRUE, WILL REVOLUTIONIZE ELECTRIC SCIENCE. THIS IS A CLOSE-UP OF THE ODIC RAY MACHINE WHICH, BY DIRECTING A CERTAIN RADIATION KNOWN AS THE ODIC RAY, CAN COUNTERACT OR DESTROY THE FORCE OF GRAVITY, PIERCE ANY SOLID OR DESTROY ANY MATTER COMPLETELY. IN THE PHOTO IT IS SHOWN JUST AS IT TOOK A PHOTO THROUGH 11 1/2 INCHES OF SOLID LEAD AND 5 1/2 INCHES OF SOLID STEEL WITH AN EXPOSURE OF FIVE SECONDS.

As is well known, in matter we have three distinct classes of eddies of force, which seem to be a perfect counterpart of a solar system. We have, namely, the molecule, made up of atoms traveling around in definite orbits; we have the atom, made up of electrons, also traveling in orbits; and the electron has been found to be made up of still smaller particles, also traveling in circular progression. Thus we have three distinct phases of force in matter. We also have three distinct phases of action in the body or amperage of electricity. The world is more or less familiar with the positive and negative sides or phases of electricity, but I have proved by experimentation that there is a dominant or third phase in all forces. That is, there is a positive, a negative, and a dominant or solar manifestation, and these three phases of force are at definite distances apart in the point of speed, and their relationship is like three, six and nine on a rule. 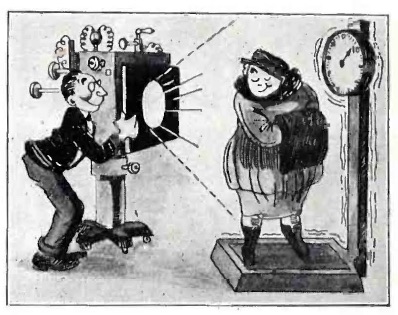 THE NEWLY-DISCOVERED ODIC RAY OUGHT TO CUT HER WEIGHT, IF NOT HER BULK, AND TICKLE HER TO DEATH. AND IT COULD BE MADE TO PAY.

Considering electricity or any of the so-called natural forces of nature from this standpoint, we find that we have in reality two forces in one:- we have a rectilinear action and also a rotating action in all forces. We can illustrate this action by considering a stream of water. Suppose we have a stream of water flowing at twenty miles per hour; the atoms making up the molecules of this water are traveling in circular progression at thousands of miles per seconds. This same condition I have proved to be existent in the nature of electricity, and I have also proved that these eddies of force making up the body or amperage of electricity can be broken up and the force corresponding to the electronic force in matter released. This force I have given the name of "Odic Activity," due to the principles employed in releasing or generating the same.

I have found that the rate of speed of Odic Activity can be changed; its polarity reversed, and its direction of discharge controlled, as I have changed its rate all the way from where it would affect a photographic plate the same as ordinary light clear up to a point where it has disintegrated matter the instant it touched it.

Hence, it will be seen that since the polarity or character of the Odic Ray can be altered or changed, it is possible for it, when properly applied, to duplicate any of the "rays" or rates of force known, between ordinary light and the point of disintegration of matter. This range or rates of force will encompass the X-ray, the Radium rays, the Ultraviolet rays, and various rates that are known but which have not been named.

As all matter is known to be formed of molecules, atoms and electrons, or of infinitely small particles of substance traveling at great speed in circular progression, reason proves to us that matter does not depend upon physical properties for its weight, but does depend upon the speed of these particles of substance, which sets up or causes a resistance to the flow of a force of nature passing into the earth. And as the predominating force that is known to be traveling into the earth is called "gravitation," the atomic speed or force stored up in these minute eddies of force must be resisting gravitation, - thus causing what we call weight.

With this hypothesis in mind, I found that by the use of the Odic Ray the degree of speed of these eddies could be altered, and this resistance changed, thus changing the weight of matter. In over a hundred different tests, I have changed the weight of practically all of the base metals, having changed aluminum approximately twenty per cent. And to prove that the principle was correct, I have reversed the process and increased the weight back to normal, and to heavier than normal, thereby proving beyond a question of doubt that the weight of objects depends upon atomic force and not upon physical properties. 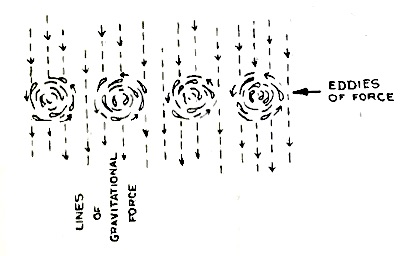 At other tunings of the ray, it has caused solid substance to disintegrate the instant the ray touched it, without explosion and leaving no smoke, ash or residue. 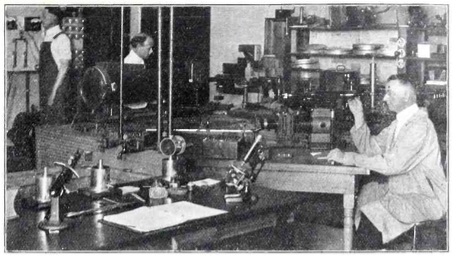 IF WE KNEW HOW TO TWIDDLE ALL THIS JUNK AROUND AND MAKE IT DO THINGS WE WOULDN'T BE EDITING A MAGAZINE. WE WOULD BE DISCOVERING THINGS INSTEAD. THIS IS ONE WEE CORNER OF THE EDGAR L. HOLLINGSHEAD LABORATORY AT PASADENA, WHERE THE ODIC RAY WAS DISCOVERED AND THE MACHINE FOR CONTROLLING IT PERFECTED. MR. HOLLINGSHEAD, THE INVENTOR, IS SEATED LOOKING THROUGH SOMETHING AT SOMETHING ELSE.

If the theory held by many physicians, and apparently proved by Dr. Abrams of San Francisco, is correct, that a disease germ is simply a unit of force that is out of harmony with the body in which it manifests, then there seems to be a vast field of usefulness open to the Odic Ray, as the ray could be tuned so as to be in harmony with a normal body (and thus naturally out of harmony with the vibration of a disease germ), and if the speed of the ray were raised sufficiently high it would certainly destroy the disease.

It is a generally accepted theory that electricity is generated by cutting lines of force. If this were all there was to the generation of electricity, it would be possible to cut any kind of lines of force, such as heat, light, or sound, and produce electricity; but as the fact remains that we must have magnetic lines of force, we see that there is another part to the process of generating electricity that is not commonly understood,- and that is resistance. We are forced to realize that as an armature whirls in a field of magnetic energy it is resisting a force; and, since resisting a force will slow it down or retard its speed, we are forced to realize that we are generating electricity by slowing down or retarding the speed of magnetic energy and transforming it into electricity. This can be proved to our reason by taking as illustration, a two-pole generator with an armature revolving between the two poles, the armature being made of nothing but a fine screen or wire, the two poles being tanks of water, and the lines of force shooting from pole to pole a stream of water. If the armature was standing still it would have very little resistance to the flow of the water, but the instant you started turning the armature, the faster it was turned, the more water would pile itself up on the face of the armature. And this is precisely what we are doing in the generation of mechanically made electricity - we are resisting the body or substance part of magnetic energy, slowing down its speed to that of electricity.

This same process can be carried through the whole seven forces of nature; that is to say, if you resist gravitation by a piece of lodestone or magnetic iron, which has an atomic speed of just such a nature as will resist gravitation and slow it down one eighth of an octave of nature, you create magnetic energy. Resist magnetic energy by an armature whirling in a field of force and you generate electricity. Resist electricity properly and you will produce an arc; resist the arc by a combustible material and you will cause flame or heat; resist the flame or heat by the oxygen and nitrogen in the air and you have sound; resist this one substance (as all force must have a substance part), properly again, in the form of amperage of electricity, in a vacuum, and you will produce an element, helium. Thus we see that by varied degrees of resistance we can start in with the force called gravitation and, step by step, resist that force down until we have reached cohesion; and thus we see that there is only one force throughout nature, but many differences in degree and character of this one force.

If the atomic speed in matter is resisted in a uniform way, that is to say, if you resist the speed of the three phases - the positive, the negative, and the dominant - and keep them in their natural relation to each other, you will not alter the character or the tensile strength of the substance; put the Odic Ray has proved that just in and to the degree that you change this normal relation of the three phases of force in matter you change the character of said matter.

There are many things the Odic Ray will do that I might describe in this article, many of which would be considered impossible by the scientific world of today; but as this would probably arouse much criticism on the part of students along this line, I will content myself by citing the few applications of the Ray as cited above.