Missile From This Gun Laughs At Natures Laws 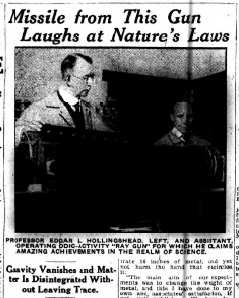 Missile From This Gun Laughs At Natures Laws (click to enlarge)

Missile From This Gun Laughs At Nature's Laws

  An instrument which, it is claimed, shoots an invisible projectile more disruptive than any known explosive has made Edgar L. Hollingshead and his "Ray Gun" an object of international attention.

The missile is the so-called Odic Activity Ray which Hollingshead asserts he has been able to focus and direct with astonishing results. it is capable, he says, of disturbing the fundamental physical organization of our known universe, and may be employed in a commercial or military way.

What It Will Do

Although still in the experimental phase, the "Ray Gun" to the satisfaction of Hollingshead and his associates, has demonstrated that:

The weight of any base metal may be instantly changed by being subjected to the Odic Activity Ray.

Ordinary rock can be made transparent.

Matter can be made to disintegrate without explosion, vanishing without ash, smoke or residue.

Water may be instantly transformed into its component elements.

A piece of metal may be given more lifting power than any gas without losing its tensile strength.

Nature's so-called immutable laws can be broken down by changing the atomic speed of matter.

Hollingshead, for 15 years a physicist, says of his theories and experiments with the Odic Activity Ray:

"Ten years ago I came to the conclusion that matter did not depend upon physical properties for its weight, but that weight is determined by the atomic speed of matter.

"It is accepted as fact that matter is an aggregation of molecules. Now, molecules are eddies of force, traveling in circular progression. These in turn are formed of still tinier particles similarly in motion, called atomic speed. Atoms are composed of electrons and ions, which have been split up and found to be composed of still smaller particles. [See rotating envelope and 7B.05 - Rotating Triplets]

"I concluded, therefore, that there is no such thing as a solid, but that what we call a solid is in reality a seething mass of whirling force.

"The only way in which force can manifest itself is through resistance to other force, principally gravity - which we call weight.

"My experiments have been to find a way of generating force that would alter the speed of these whirls called matter so that i could change its degree of resistance to either gravitation or levitation and thus its weight. The result is the Odic Activity Ray which I have generated and which has greater possibilities than any other ray known.

The Odic Activity Ray will affect a photographic plate or disintegrate matter, depending upon the wave length, which can be altered - all rays known to man being between these two extremes. It can be directed and focused, something which has not been done with x-rays.

"It has been generated to penetrate 16 inches of metal, and yet not harm the hand that encircles it.

"The main aim of our experiments was to change the weight of metal, and this I have done to my satisfaction, if not yet publicly. We have decreased the weight of aluminum, for instance, 20 per cent; then made it heavier than normal. And every base metal has responded to some degree, the change being instantaneous and permanent until again treated." [from Syracuse (NJ) Journal; January 3, 1922]