"The effects of the law of sympathetic association, which Mr. Keely demonstrated as the governing medium of the universe, find illustrations in inanimate nature. What else is the influence which one string of a lute has upon a string of another lute when a stroke upon it causes a proportionable motion and sound in the sympathizing consort, which is distant from it, and not perceptibly touched? It has been found that, in a watchmaker's shop, the timepieces, or clocks, connected with the same wall or shelf, have such a sympathetic effect in keeping time, that they stop those which beat in irregular time; and, if any are at rest, set those going which beat accurately. Norman Lockyer deals with the law of sympathetic association as follows:- "While in the giving out of light we are dealing with molecular vibration taking place so energetically as to give rise to luminous radiation, absorption phenomena afford no evidence of this motion of the molecules when their vibrations are far less violent." . . ."The molecules are so apt to vibrate each in its own period that they will take up vibrations from light which is passing among them, provided always that the light thus passing among them contains the proper vibrations." . . . "Let us try to get a mental image of what goes on. There is an experiment in the world of sound which will help us." . . . "Take two large tuning-forks, mounted on sounding-boxes, and tuned to exact unison. One of the forks is set in active vibration by means of a fiddle-bow, and then brought near to the other one; the open mouths presented to each other. After a few moments, if the fork originally sounded is damped to stop its sound, it will be found that the other fork has taken up the vibration, and is sounding distinctly. If the two forks are not in unison, no amount of bowing of the one will have the slightest effect in producing sound from the other." 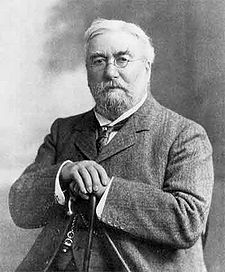 
"Although physicists know that this extraordinary influence exists between inanimate objects as a class, they look upon the human organism as little more than a machine, taking small interest in researches which evince the dominion of mind over matter. Keely's experimental research in this province has shown him that it is neither the electric nor the magnetic flow, but the etheric, which sends its current along our nerves; that the electric or the magnetic bears an infinitely small ratio to that of an etheric flow, both as to velocity and tenuity; that true coincidents can exist between any mediums - cartilage to steel, steel to wood, wood to stone, and stone to cartilage; that the same influence (sympathetic association) which governs all the solids holds the same governing influence over all liquids; and again, from liquid to solid, embracing the three kingdoms, animal, vegetable and mineral; that the action of mind over matter thoroughly substantiates these incontrovertible laws of sympathetic etheric influence; that the only true medium which exists in nature is the sympathetic flow emanating from the normal human brain, governing correctly the graduating and setting-up of the true sympathetic vibratory positions in machinery necessary to success; that these flows come in on the order of the fifth and seventh positions of atomic subdivision, compound ether a resultant of this subdivision; that, if metallic mediums are brought under the influence of this sympathetic flow they become an organism which carry the same influence with them that the human brain does over living physical positions - that the composition of the metallic and of the physical are one and the same thing, although the molecular arrangement of the physical may be entirely opposite to the metallic on their aggregations; that the harmonious chords induced by sympathetic positive vibration permeate the molecules in each, notwithstanding, and bring about the perfect equation of any differentiation that may exist - in one, the same as in the other - and thus they become one and the same medium for sympathetic transmission; that the etheric flow is of a tenuity coincident to the condition governing the seventh subdivision of matter - a condition of subtlety that readily and instantaneously permeates all forms of aggregated matter, from air to solid hammered steel - the velocity of the permeation being the same with the one as with the other; that the tenuity of the etheric flow is so infinitely fine that any magnifying glass, the power of which would enlarge the smallest grain of sand to the size of the sun, brought to bear upon it, would not make it visible to us; that light, traversing at the speed of 200,000 miles per second a distance requiring a thousand centuries to reach, would be traversed by the etheric flow in an indefinite fragment of a second. 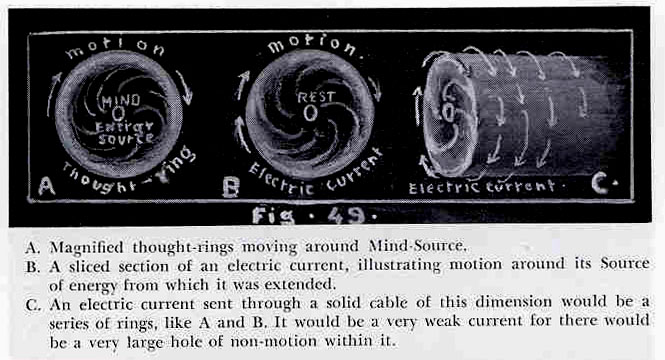 
"These are some of the problems which Mr. Keely has had to solve before he could adapt his vibratory machinery to the etheric flow. The true conditions for transmitting it sympathetically through a differential wire of platinum and silver have now been attained, after eight years of intense study and elaborate experiment. The introductory indications began to show themselves about two years ago, but the intermissions on transmission were so frequent and so great as to discourage Mr. Keely from further research on this line. Then came one of those "inspirations" which men call "accident," revealing to him "the true conditions" necessary to produce a sympathetic flow, free of differentiation, proving conclusively the truth of his theory of the law governing the atomic triplets in their association. Differentiation, by compound negative vibration of their neutral centres, causes antagonism, and thus the great attractive power that aggregates them becomes one of dispersion or expansion, accompanied by immense velocity of rotation, which carries its influence through the whole volume of air, 230 cubic inches contained in sphere, within its 33 1/3 chord of its circle of coincidence. By this wire of platinum and silver the current of force is now passed to run the vibratory disk, thus altogether upsetting the "compressed air" theory of Professor Barkes, Dr. Hall, and others of less note.

"In setting the conditions of molecular sympathetic transmission by wire," writes Keely, "the same law calls for the harmonious adjustment of the thirds, to produce a nonintermittent flow of sympathy. Intermission means failure here. That differential molecular volume is required, in two different mediums of molecular density, to destroy differentiation of sympathetic flow, seems at first sight to controvert the very law established by the great Creator, which constitutes harmony - a paradoxical position which has heretofore misled physicists who have propounded and set forth most erroneous doctrines, because they have accepted the introductory conditions, discarding their sympathetic surroundings. The volume of the neutral centre of the earth is of no more magnitude than the one of a molecule: the sympathetic conditions of one can be reached in the same time as the other by its coincident chord."

"When Keely's system is finished, then, and not until then, all that is involved in his discovery will be made known to the world.

"Five years after this paper on Etheric force was written, Dr. Henry Wood, of Boston, wrote an article, which appeared in The Arena of October, 1891, having the title "Healing through Mind". Dr. Wood says: "Truth may be considered as a rounded unit. Truths have various and unequal values, but each has its peculiar place, and if it be missing or distorted, the loss is not only local but general. Unity is made up of variety, and therein is completeness. Any honest search after truth is profitable, for thereby is made manifest the kingdom of the real. . . ." 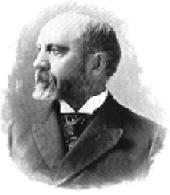 
"We forget that immaterial forces rule not only the invisible but the visible universe. Matter, whether in the vegetable, animal, or human organism, is molded, shaped, and its quality determined by unseen forces back of and higher than itself. We rely upon the drug, because we can feel, taste, see, and smell it. We are colour-blind to invisible potency of a higher order, and practically concluded that it is non existent." - Healing Through Mind. Bloomfield-Moore, Keely and His Discoveries

"The action of the mind itself is a vibratory etheric evolution, controlling the physical, its negative power being depreciatory in its effects, and its positive influence elevating." Keely Etheric Vibration. - The Key Force

"Psyche cannot be totally different from matter, for how otherwise could it move matter? And matter cannot be alien to psyche, for how else could matter produce psyche? Psyche and matter exist in one and the same world, and each partakes of the other, otherwise any reciprocal action would be impossible. If research could only advance far enough, therefore, we should arrive at an ultimate agreement between physical and psychological concepts." Jung


"He has given, 'as a man thinketh in his heart, so is he' (Proverbs 23:7). Not that thinking takes place in the heart. For thinking is of the mind. Yet the flow, the impulse, the emotions in material things are activative through impulse of nature, of character, of purpose, of will." Cayce (585-9) underline added