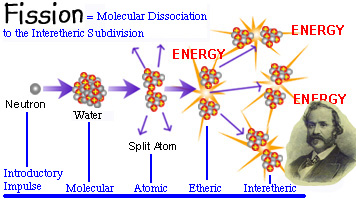 "The transmission of sympathetic atomic vibration, through a triple nodal transmitter, induces an interatomic percussion, that results in triple atomic subdivision, not oscillating across the diameter of the atom, but accelerating to an infinite degree the atomic film that surrounds it and at the same time extending the vibratory range of the atom far enough to set free the gaseous atomic element. [Keely, ANSWERS MADE IN LETTERS FROM MR. KEELY - TO QUESTIONS ASKED OF HIM]

"In one experiment in liberating ozone by molecular percussion, inducing luminosity, a percussive molecular force of 110,000 lbs. per square inch was registered on the testing lever. This enormous pressure caused the heavy steel parts to so bend and bulge that the instrument was at that time unfitted for further experiments and had to be repaired." [PRESSURES PRODUCED BY VIBRATION]

Nikola Tesla writes: "I have disintegrated atoms in my experiments with a high potential vacuum tube I brought out in 1896 which I consider one of my best inventions." [Radio Power will Revolutionize, Modern Mechanix and Invention, July, 1934]