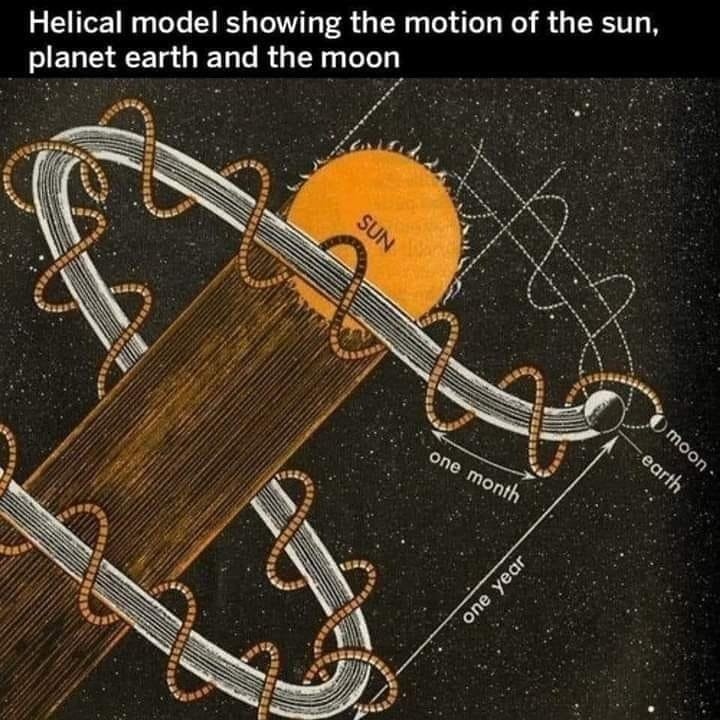 
Schauberger
turbine. This fish, which is known to remain motionless in torrential flows, flees upstream like lightning when danger threatens and in the spawning season floats upwards in the centre of the falling water-masses, which gyrate in cycloid-spiral-space-curves. Possessed of the requisite aids to enhance the potential of the 'original' dynagens, the trout cannot only overcome its own weight, but also the specifically heavy water-masses flowing against it. [The Energy Evolution - Harnessing Free Energy from Nature, Cadaverine Poison in Ray-Form - Ptomaine Radiation]

In conclusion it is necessary to address in more detail the question: Whence do these gigantic levitational forces actually come? Taking a very large-scale example from Nature, these are the forces that maintain the whole Earth in a fragile state of equilibrium, because they also move in cycloid-spiral-space-curves like every falling filament of water. [The Energy Evolution - Harnessing Free Energy from Nature, Cadaverine Poison in Ray-Form - Ptomaine Radiation]

trout, which, floating upwards, are able to surmount freely overfalling waterfalls several metres high, if particularly hollowed out flow-guiding stones cause the falling water to flow in 'cycloid-spiral-space-curves', the form of motion that arises and can be observed above every bunghole through which water is able to free-fall. This how the water-inwinding suctional forces evolve and the reactive forces acting in the opposite direction come into being in the axis of the suction-vortex. It is the latter forces that are at issue here. Today's science, which measures and weighs everything exactly, overlooked them, because the 'producer of measure and weight' can neither be measured with a yardstick, nor weighed with decimal scales. [The Energy Evolution - Harnessing Free Energy from Nature, The Life-Current in Air and Water]

No law of energy conservation, nor any heat or other equivalence exists and hence no insuperable law of gravity, for all that is necessary is merely to accelerate a mass of ordinary water or air naturalesquely in order to generate upwardly flowing magnetism. This is the colossal force that maintains the whole Earth-ball in unstable equilibrium and whose revolution in cycloid-spiral-space-curves is caused and sustained by the above rotary (torque-producing) levitating current. By means of magnetolytic dissociative processes, this motion ur-produces the enlivening and originally moving (form-creating) retro-influent energy out of deceased fatty-matter; an energy that gives rise to the hitherto mysterious processes of genesis and increase, and the qualitative improvement (ennoblement) of what has been naturalesquely increased. In other words, it is responsible for the natural self-renewal and evolvement of everything that crawls and flies on this Earth. [The Energy Evolution - Harnessing Free Energy from Nature, Magnetism - Electricism]

economy and industry secular science instructed and taught the opposite 'winding'. Therefore, in lieu of the evolution-fostering (ennobling) spirit, it raised and reinforced the demon in the form of development-impeding electricism, as if by conveyor belt, to such an extent that the magnetism-generating Earth, which moves in cycloid-spiral-space-curves, is now incapable of neutralising the decomposive energies and their effects produced by millions upon millions of human beings. [The Energy Evolution - Harnessing Free Energy from Nature, Magnetism - Electricism]