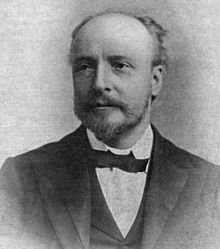 Sir James Dewar
(click to enlarge)
Professor Dewar, Fullerian Professor of Chemistry at the Royal Institution of Great Britain, wrote in 1890: If Mr. Keely succeeds in making his discovery practically useful, as it is said he is demonstrating his ability to do, if this information be true, it is strange to contrast the past history of science with the present. Fancy the discoverer of electricity having succeeded in inventing the modern dynamo machine! This would mean the concentration of hundreds of years of scientific discovery and invention into the single life of one man. Such a result would be simply marvelous. [James Dewar, Keely Supported by Eminent Men of Science]

Sir James Dewar FRS (20 September 1842 - 27 March 1923) was a Scottish chemist and physicist. He is probably best-known today for his invention of the Dewar flask, which he used in conjunction with extensive research into the liquefaction of gases. He was also particularly interested in atomic and molecular spectroscopy, working in these fields for more than 25 years. Wikipedia, James Dewar

Dewar was known to Bloomfield-Moore and Keely and mentioned often in the her writings and letters (see below).