We have thus described the manner in which all creating bodies "emerge from space" for an interval to fulfill their destined purposes, and are then "swallowed up by space" to rest for an interval before again emerging to continue the fulfillment of their purposes. God's one desire to think action, and rest from action, in sequential intervals, is thus fulfilled. Likewise, His one action of giving for regiving to manifest His Love, is also fulfilled, together with His one motive for seemingly dividing His unity into two desires for unity.

These are the qualities of God's imagining which He projects upon the screen of His vast space in such rapid sequences of changing patterns that the senses of man are deceived by seeing motion where no motion is. Likewise, that which he sees as life

in living bodies and death in dying bodies, is but simulated motion to simulate life. This universe of seeming motion is but an electric recording of Mind-imaginings. God's one purpose, which is to think what He IS, and what He KNOWS into His own image, is thus fulfilled. All of His Creation is for the fulfilling of that one ideal. Man is the consummate ideal of His

(scan courtesy of University of Science & Philosophy) (click to enlarge)

Fig. 33. Basis for structure of atomic, solar and stellar systems. 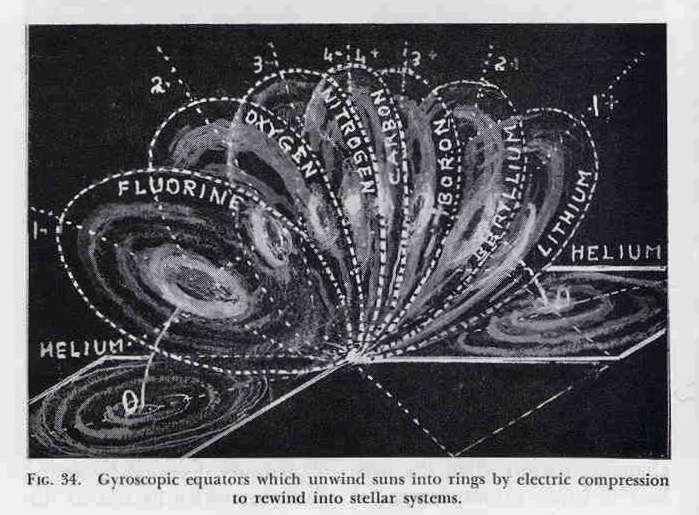 (scan courtesy of University of Science & Philosophy) (click to enlarge)

Fig. 34. Gyroscopic equators which unwind suns into rings by electric compression to rewind into stellar systems.

purpose, for man alone, of all His Creation, can become aware of his Oneness with His Creator.

Fig. 35. Illustrating principle of construction of matter by the projection of polar rings from cathodes to collide as anodes.


Man himself, however, is but still in the making. For long ages he has been unaware of his Self because of building his body. The dawn of that conscious awareness has at last come to man, though that stage also is in its early beginnings. He is still so new in his spiritual unfolding that it is difficult for him to forget his fight for body survival in his jungle days. He has begun to listen to the Silent Voice within him, however, and is gradually becoming aware of the Light of His Source.

Some there are, however, who hear that Voice with greater understanding than others, but few who hear with complete understanding. These have become more illumined with the Light of Mind and their thinking has so far transcended their sensing that much of God's Omniscience is already theirs.

Such a man was Jesus, the Nazarene, who fully knew His Oneness with God: In Jesus God had fulfilled His complete desire for creating Man in His own image and likeness. Jesus gave to man that which He was commanded to give for man's uplift toward the Light, but man was not able to bear that which Jesus told him. Man crucified Jesus for thus claiming His divinity and for trying to convince men that they were like unto God. Man still crucifies all who come to transform him from the

God is a patient Father-Mother of man, however. The ages of time consumed in creating man in His own image mean nothing to Him. In this respect God says to man: "All men will come to Me in due time, but theirs is the agony of awaiting."