See Bjerknes Effect. Having mutual attraction. The Compound Interetheric, as all ethers, are harmonic (form unisons) to one another, therefore they are sympathetic and mutually Attractive.

"Before this could be brought about it was necessary to effect a sympathetic affinity between his machinery and the polar flow, minus magnetism. The colossal nature of the difficulties that he has surmounted can never be realized as by those who have followed him during the last five years, and seen them spring up one after another, at every advance, to bar his way." [Newton of the Mind]

"Only two vibratory conditions can be so associated as to excite sympathetic affinity between two physical organisms, the etheric chord of B flat, third octave and on etheric sympathetic transmission the chord of E flat, with third dominant, sixth enharmonic and ninth diatonic, with octave enharmonic." [HOW THE MUSICAL SPHERE ROTATES] 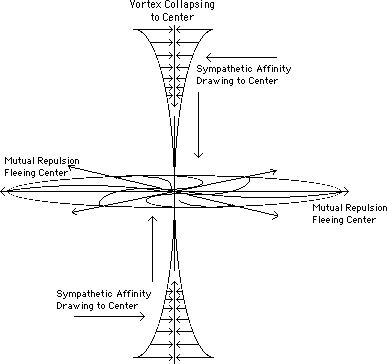 
Pythagoras in 520 BC stated, “In the light of ancient sympathy, image was constructed with magical emphasis. The orders of architecture, shape of columns of a temple, its roof, dome, measurements, and dimensions, if accurately made, would capture the qualities of certain deities because of sympathetic affinity.”