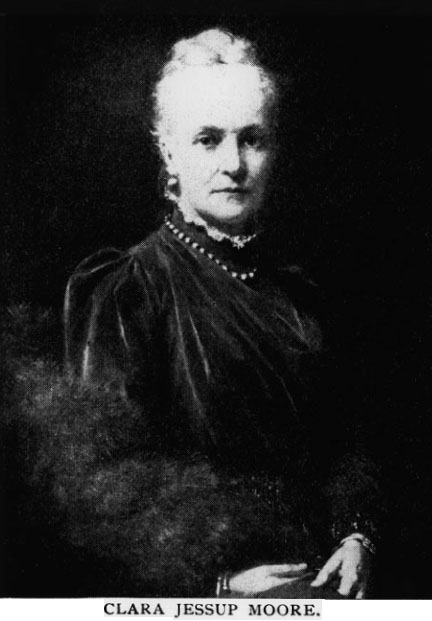 Clara Jessup Bloomfield-Moore
"Taking the law of assimilation as the cosmical law, together with self-manifesting power as the characteristic of being, we reach a primary classification of created objects, which corresponds with that which is known as mind and matter - or rather let us say mind and that which is not mind; for there is ground for the apprehension that mind and matter do not include all that exists; and that, along with matter, ether ought to be considered as something intimately related to matter indeed, but yet not just matter. When the elements of the ethereal medium are regarded as truly and simply material however small and light they may be, the elasticity and pressure which must be assigned to that medium in order to admit of the velocity of light, are altogether out of the harmony of things; and wholly incredible, especially when confronted with the phenomena and the theory of astronomy. Thus, to justify the velocity of light on the same principles as those of sound, in various material media, the ethereal pressure must be 122,400,000,000 times greater than that of the atmosphere - which is incredible, says Macvicar." [Bloomfield-Moore, Etheric Force Identified as Dynaspheric Force]


"Science admits that nature works with dual force, though at rest she is a unit. "Nature is one eternal circle". Keely's discoveries prove that the doctrine of the Trinity should be set down as an established canon of science - the Trinity of force. All nature's sympathetic streams - cerebellic, gravital, electric and magnetic - are made up of triple currents. The ancients understood this dogma in a far deeper sense than modern theology has construed it. The great and universal Trinity of cause, motion and matter - or of will, thought, and manifestation - was known to the Rosicrucians as prima materia. Paracelsus states that each of these three is also the "other two; for, as nothing can possibly exist without cause, matter and energy - that is, spirit, matter and soul (the ultimate cause of existence being that it exists), we may therefore look upon all forms of activity as being the action of the universal or Divine will operating upon and through the ether, as the skilled artificer uses his tools to accomplish his designs; making the comparison in all reverence." [True Science]