An article by W. F. Barrett referenced in Hughes' book Harmonies of Tones and Colours - Developed by Evolution. This article was published in The Quarterly Journal of Science, January, 1870.

The article compares the development of musical sounds to the light or color spectrum.

Light from Sound
Colored Light from Sound
"Vibrations necessary to the production of colors are very high, reaching to millions of vibrations per second. The true relation between the vibration and the color can only be a harmonic one, as colors commence in the millions and end not lower than in trillions of vibrations per second. The conditions essential of this class of phenomena are, first, a condition relating to the structure in which they take place, free from all extraneous vibrations; the experimenter's presence even influences to a great extent the motions of the molecules used in the experiments. A bath is employed, arranged so that light rays can be projected upon it at certain angles, and from that upon a screen. The bath must have what are termed centers of association and concentration, and suspended across its surface in such a manner that the centers approach very near the surface of the liquid, which is preferably water, whose surface must be free from all films. Upon this is dropped a single drop of naptha dissolved in ether, which constantly spreads over the surface and gradually evolves most beautiful variations of color. The vibrations are transmitted from an instrument capable of producing vibrations of varying intensity and pitch, across the line of resonating centers, nine in number. The first center shows a light straw color, condensing about the center; the second shows a very dark straw color; the third exhibits an orange red; the fourth, a bluish red; the fifth is largely green. The entire gamut ranges from a very light yellow to a dark blue. The theory is that the vibrations produced gather certain numbers of the molecules together about the centers, which represent different ranges of motion, and which by the color evolved affords a demonstration of a certain connection between that vibration and the colors it educes. Under different conditions, using films suspended in the air, and light passing through these films under polarization, (polarized light) the vibrations influence the molecules in the film, producing again exhibitions of varying colors when projected upon a screen. Experiments of this kind are most difficult, on account of the unstable conditions found everywhere." [Keely from Pyramids Telescopes and Light; see Angle of Incidence, Differentiation, Quasicrystal, Refraction]

Light and Sound
An Examination of Their Reputed Analogy
by William Fletcher Barrett, F.C.S., Natural Science Master at the London International College. 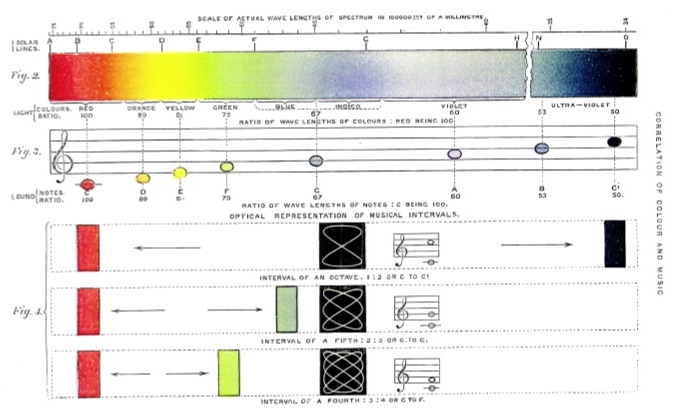