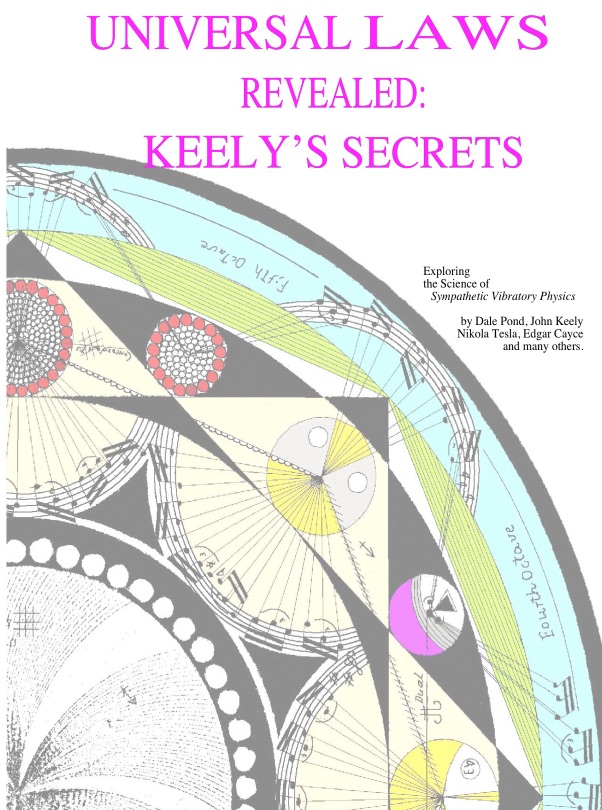 "This new revised edition will be the foundation of future science and will be sought after by everyone as their text book." S.S.

Ten years of research went into this book. This collection of articles by Keely, Nikola Tesla, Dale Pond and many others reveals the scientific significance and correlations of Keely's work: the science of Sympathetic Vibratory Physics. The text has been completely retypeset, laid-out and re-illustrated. This volume contains the most comprehensive interpretation of SVP ever done. This is the definitive book on Keely's discoveries and science. It includes Pond's clarifications on Keely's 40 Laws of Harmony. Extensively illustrated including the original crystal clear Library of Congress photographs. Most of Keely's beautiful Acoustic Charts donated by Mr. Tonn have been computer enhanced and are legible and are included. Contains a comprehensive bibliography of source materials. 8.5" x 11", 284 pages. ISBN 1-57282-003-9

"I have studied Keely's work and compared it to many other scientific and esoteric sources without finding anything proven that contradicts it. The thing is, there have been many impressive scientific achievements over the years which have been very useful but their explanations always seem uncomfortable, unsatisfactory speculation without cohesion. Whereas Keely's theories just seem to feel so right. When I read Keely's explanations I can't help but say to myself, that has to be how it is." M.H., July, 1998

"This is future technology beyond anything we have discussed in FTIR. We have known of John W. Keely (and Dale Pond) since 1990, and brought Keely's work to your attention on a couple of occasions.

Now comes this beautifully produced volume, over-size, with photographs, patent drawings, charts, graphs, etc. May be, at long last, Keely's genius and Dale Pond's persistence will penetrate a substantial market. Keely is truly unique, a technology unlike anything else we know about, magnificent intricacy. In brief, all is sympathetic vibration, and sympathetic vibration is the etheric force.

But this essential simplicity may be why Keely's work has taken so long to penetrate.

Dale Pond has done a masterful job at laying out Keelyâ€™s ideas and blending text with diagrams and photographs, but many of the concepts are elusive (As an example, Keely's triple chords still baffle this Editor.) Working in 1880, Keely is 200 years ahead of the rest of us. For example, on page 165 is a Keely schematic dated 1894 compared to a similar schematic by famed quantum physicist Richard Feynman over 80 years later.

It takes an understanding of acoustics and musical theory to even begin to understand Keely. The essence is the "music of the spheres" known to ancient wisdom ... more simply all is sympathetic vibratory resonance. While modern engineering recognizes harmonics, Keely proposes many more relationships than merely doubling and halving frequencies.

But this should not stop you from spending time with Keely's ideas. With just an introductory physics course somewhere in your background and acquaintance with musical theory (much of Keely is in musical notations) you will travel a long way with this book.

This is the kind of book you pull out time and time again over the years each time mastering a little more of Keely's intricate, unique concepts.

This should be in your library, DEFINITELY." Anthony C. Sutton, editor Future Technology Intelligence Report. March, 1996.

"Just finished reading the book. I don't think you fully realize the extent your comments and Keely's discoveries have helped to extend my understanding of religion. I am speaking of religion in general not just one religion while disgarding the others. God created the world, science didn't. Therefore God comes first, science follows.

Your book helped the bridge between religion, science, metaphysics, philosophy, etc. I cannot thank you enough for publishing this book. I hope you publish more on Keely and related discoveries. These books may not be on the best seller list but they are deeply appreciated. Please put me on your list if subjects on Keely or related topics are published." SG

"I continue to find your work extremely interesting and exciting. I purchased your book "Universal Laws Never Before Revealed..." and thoroughly enjoyed it. I had trouble sleeping thinking about the many concepts covered therein... I also wrote a laudatory book review on the Amazon.com site, so hopefully more people can become aware of Keely and the study of sympathetic vibratory physics." IB