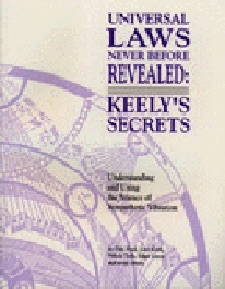 
This book by Dale Pond (1994) is out of print. It has been replaced by an updated version: Universal Laws Revealed: Keelys Secrets

Testimonials
Amazon won't let me make a comment on this book unless I buy the book. Why would I do that? I wrote it! But here is what others' have said less the one negative comment by a guy who obviously doesn't know the difference between classical and non-classical physics. Keely's work was in non-classical physics which field did not exist in his time. Of course his physical machines were build using classical physics, classical mechanics and acoustics.

The proof that Keely was not a scam artist is most likely in the skies above the Hudson Valley and Belgium May 19, 2009
By JOHN P. HANSSEN
Format: Paperback
I would first like to say that Roland Barker is completely off the mark in his negative review of Keely. I find it hilarious that there have been a number of people that have labeled Keely a fraud without ever producing a single speck of evidence to support this claim. The first attempt at debunking Keely came from Scientific American shortly after he passed away. If fact, the entire thesis of these Scientific American articles was that Keely's whole scientific career had been nothing more than an entire string of frauds displayed before gullible, unscientific people who were not able to comprehend enough science to disprove Keely's incredible claims. What is utterly ridiculous about this claim of Scientific American is the fact that many noted men of science, including Joseph M. Leidy, M.D. of Pennsylvania University, James M. Wilcox, M.D., author and noted physician, along with many others, made a complete and thorough examination of Keely's inventions, his laboratory, and his demonstration of his devices and could find NO FRAUD OF ANY KIND! In fact, they were completely convinced as to the truthfulness of Keely's achievments and his understanding of the scientific method. Even the greatest of scam artists could not achieve such a feat--especially in the complete lime light of so many respected men of science acting as constant, observing eyes as to any minute clues that might reveal any fraud.
These rediculous cries of fraud from Scientific American and others began immediately after Keely's death when they made an examination of his laboratory. They thought they found what they were looking for when they tore up the floor of his lab and found a huge metal sphere underneath the floor. This event led these people to state that Keely had used compressed air to perform his miraculous demonstrations. The only problem with this hilarious claim by these so called "debunkers" was that even if this claim were true, Keely would have earned a fortune from compressed air inventions. Yet, he never made one penny off these.
It can rightly be said that both Keely and Tesla were the founding fathers of anti-gravity technology and before labeling this as "science fiction", I highly recommend that people do some research on the Hudson Valley and Belgium UFO sightings. Thousands of eyewitnesses, very credible eyewitnesses, as a matter of fact, have reported seeing huge metallic boomerang and triangle structures floating through the night skies of the Hudson Valley and Belgium, making no sound and apparently using anti-gravity technology developed by Keely and Tesla. The only main difference between Keely and Tesla is that Tesla used electrical current in accomplishing his feats, whereas Keely used frequency and vibration to accomplish his.
Much more could be said in this review about Keely, but, instead, I encourage everyone to read "Universal Laws". I all the more so encourage people to read "Free Energy Pioneer" by Theo Pajmans, which is a much better publication and very well researched.
So, while I intend no ill will toward Mr. Barker or any other so called "skeptics", I do encourage them to really research further the man John Worrell Keely and see that he was not a scammer, but one who really did discover a new source of energy, which, unfortunately, even in today's world, is still not ready for due to the lust for money and power by governments and corporations. And no, this is not "conspiracy theory tin-foil hat" tripe, but a sad fact of life in the world we live in.

Great Beginnings November 21, 2004
By Edward L. Pratt
Format: Paperback
I have read and reread this book a number of times, mostly to understand the terms used by Keely. It is unfortunate that you may get distracted by the use of his own terms, don't. It is a must for the student who wants to advance of our sciences to the next level! Also read Viktor Schaubergers work! taken together,they will give you a truly remarkable insight into the nature of our universe.

Interesting ideas, but low on real information December 13, 2000
By A Customer
Format: Paperback
This book has some interesting pictures and historical factoids, but as a scientist and engineer I found it to be lacking much real information. It seems that Keeley was the only person who really understood his ideas, and wrote things down in cryptic oversimplified doodles. I am very openminded and was interested in this book, but lots of it seems like pseudo-babble. Maybe I just need to read it again??

Fascinating review of Keely's amazing discoveries September 14, 1998
By Ian Boersma
Format: Paperback
I found this book to be extremely fascinating and inspirational. It covers Keely's incredible, ground-breaking research into sympathetic vibration and his quest to find useful applications for this inexhaustible power in our world. The book contains many detailed diagrams, photos of Keely and his inventions, and engaging contemporary accounts of his discoveries. Before Stephen Hawking, before Einstein, it was Keely that proposed that science and spirtuality are one and the same.
If you have any interest in physics, music, sound therapy, or just want to learn more about this amazing man, then buy this book!