Capital "S" Self is the awakened Self. Small letter "self" is the ego.

"Each being comes to the point of their own realization (Awakening) in unique ways and by unique combinations of experience and wisdom. The point is often approached and rejected many times before the actual crossover acceptance happens. It requires a great deal of courage to crossover to a new and different perspective of the life experience. It requires releasing well-learned lessons and entering into a completely new consciousness of what reality truly is. For those who are on the planet Earth now, the deceptions are of such magnitude and the truth of what each being is, so well hidden, that the acceptance of the truth by the masses is such a gigantic leap in consciousness that it appears to be impossible that it could possibly happen. Yet, happen it must if this segment of the human race and this jewel of a planet are to survive." Anonymous, Becoming

Mind Observing Mind Neutral or objective observing of Self is a prerequisite to Self Realization; i.e., being aware of self (what is in one's Mind).

"When you first begin to Observe yourself, you will normally find that the observation is made by the mind after the mind has thought and made the belly feel, eventually the mind will observe the mind as it arises. It is then a kind of conflict. Eventually this will move to an observation of a tiny feeling then the thought. Further it then becomes a distinct observer watching the thoughts, the images of mind and the feelings as if one is watching a tv. At this point one becomes detached from the chaos if you like and has control over life, but until then one does not know or is not aware that life is in control of them all the time they have not developed this awareness by self observation." [Babaji Mahabaratha] 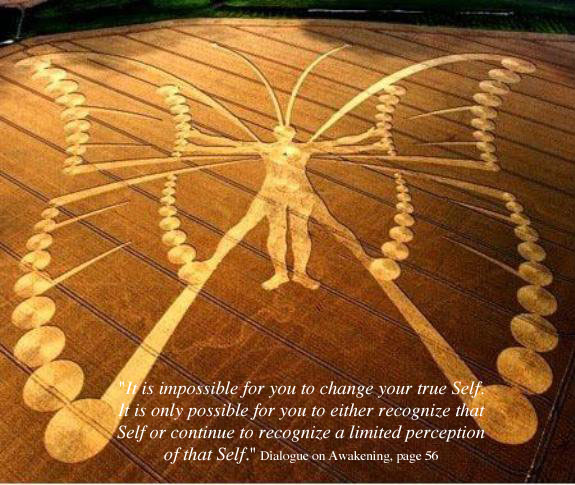 Recognizing Self
(click to enlarge)
"It is impossible for you to change your true Self.

of that Self." [Dialogue on Awakening, page 56]