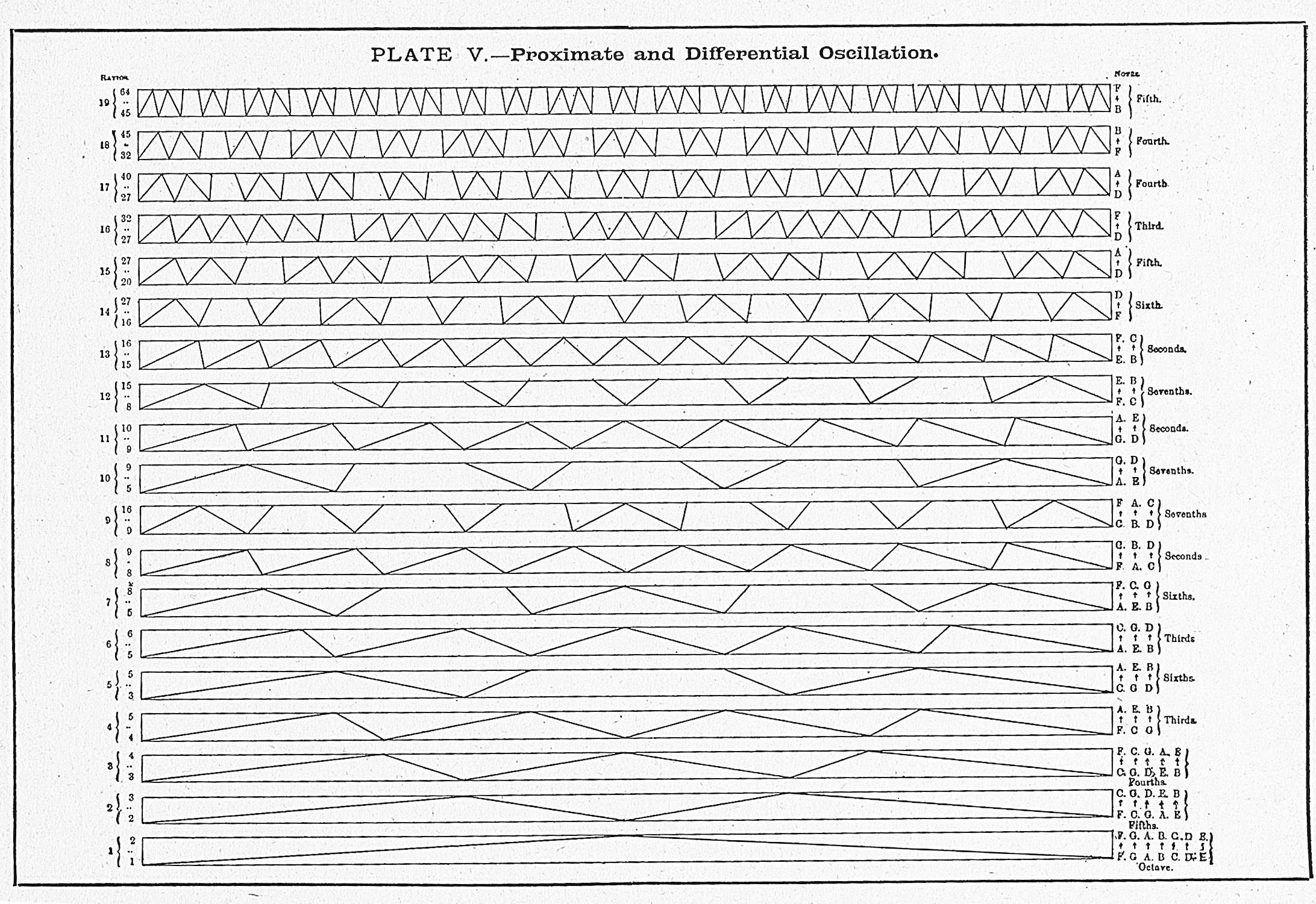 
When 25 pendulums are arranged and oscillated to represent the different musical ratios in their natural marshalling, they will all meet at 1 when 64 of the highest is counted. This plate is intended to show that there are two kinds of meeting and passing of the pendulums in swinging out these various ratios. In the ratio of 8:9 the divergence goes on increasing from the beginning to the middle of the period, and then the motion is reversed, and the difference decreases until they meet to begin a new period. This may be called the differential way. In the ratio of 45:64 there is an example of what may be called the proximate way. In this kind of oscillations meet and pass very near to each other at certain points during the period. In 45:64 there are 18 proximate meetings; and then they exactly meet at one for the new start. This last of the ratios, the one which finished the system, is just as if we had gone back to the beginning and taken two of the simplest ratios, [Scientific Basis and Build of Music, page 105]

save the octave, and made them into one, so that in its proximate meetings during its period it seems composed of the ratio 2:3 twelve times, and 3:4 seven times; twelve times 2 and seven times 3 are 45; twelve times 3 and seven times 4 are 64. This long period of 45 to 64 by its proximate meetings divided itself into 19 short periods, and oscillates between the ratios of 2:3 and 3:4 without ever being exactly the one or the other; the difference being always a very small ratio, and the excess of the one being always the deficiency of the other. This fifth, B to F, has been misnamed an "imperfect fifth." When these two notes in the ratio of 45:64 are heard together, the oscillating proximately within it of the two simple ratios gives this fifth a trembling mysterious sound. [Scientific Basis and Build of Music,page 106]

The ratio of 1:2 belongs to neither proximate nor differential periods. It corresponds to unity; and, like the square and the circle, it admits of no varieties. [Scientific Basis and Build of Music,page 106]

There are seven differential and eleven proximate periods all differing in their degrees of complexity according to the individual character of the ratio; and they illustrate to the eye what is the effect in the ear of the same ratios in the rapid region of the elastic vibrations which cause the musical sounds. [Scientific Basis and Build of Music,page 106]