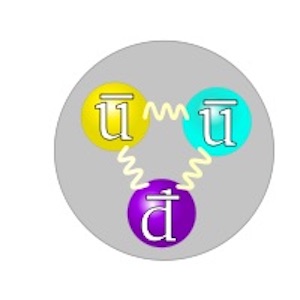 (click to enlarge) The antiproton, p, (pronounced p-bar) is the antiparticle of the proton. Antiprotons are stable, but they are typically short-lived, since any collision with a proton will cause both particles to be annihilated in a burst of energy.

The antiproton was first experimentally confirmed in 1955 at the Bevatron particle accelerator by University of California, Berkeley physicists Emilio Segrè and Owen Chamberlain, for which they were awarded the 1959 Nobel Prize in Physics. In terms of valence quarks, an antiproton consists of two up antiquarks and one down antiquark (uud). The properties of the antiproton that have been measured all match the corresponding properties of the proton, with the exception that the antiproton has electric charge and magnetic moment that are the opposites of those in the proton. The questions of how matter is different from antimatter, and the relevance of antimatter in explaining how our universe survived the Big Bang, remain open problems—open, in part, due to the relative scarcity of antimatter in today's universe. Wikipedia, Antiproton