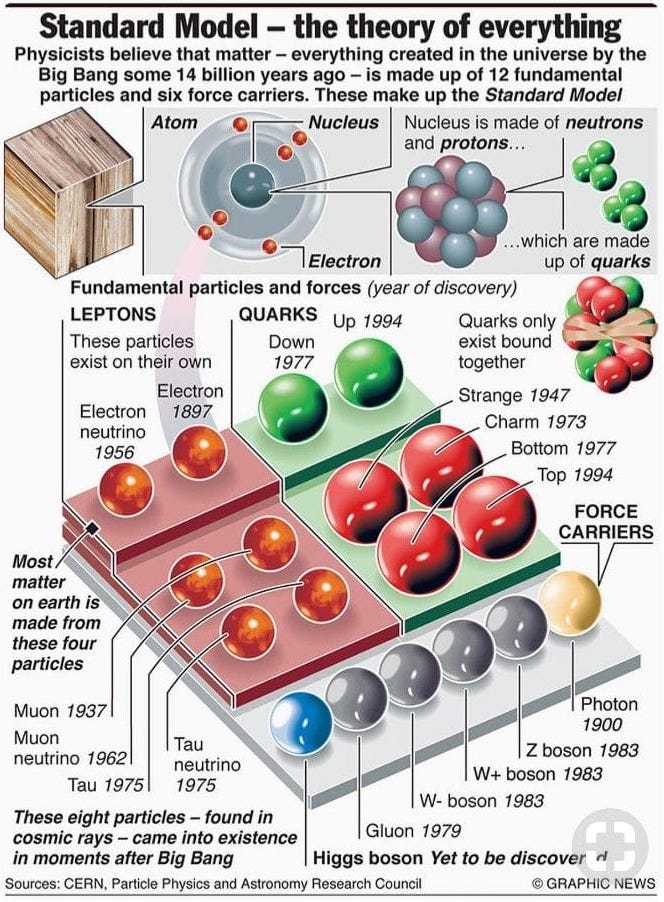 (click to enlarge) The Standard Model of particle physics is a theory concerning the electromagnetic, weak, and strong nuclear interactions, as well as classifying all the subatomic particles known. It was developed throughout the latter half of the 20th century, as a collaborative effort of scientists around the world. The current formulation was finalized in the mid-1970s upon experimental confirmation of the existence of quarks. Since then, discoveries of the top quark (1995), the tau neutrino (2000), and the Higgs boson (2012) have given further credence to the Standard Model. Because of its success in explaining a wide variety of experimental results, the Standard Model is sometimes regarded as the "theory of almost everything".

Although the Standard Model is believed to be theoretically self-consistent and has demonstrated huge and continued successes in providing experimental predictions, it does leave some phenomena unexplained and it falls short of being a complete theory of fundamental interactions. It does not incorporate the full theory of gravitation as described by general relativity, or account for the accelerating expansion of the universe (as possibly described by dark energy). The model does not contain any viable dark matter particle that possesses all of the required properties deduced from observational cosmology. It also does not incorporate neutrino oscillations (and their non-zero masses).

The development of the Standard Model was driven by theoretical and experimental particle physicists alike. For theorists, the Standard Model is a paradigm of a quantum field theory, which exhibits a wide range of physics including spontaneous symmetry breaking, anomalies and non-perturbative behavior. It is used as a basis for building more exotic models that incorporate hypothetical particles, extra dimensions, and elaborate symmetries (such as supersymmetry) in an attempt to explain experimental results at variance with the Standard Model, such as the existence of dark matter and neutrino oscillations. Wikipedia, Standard Model

"The present concept of atomic structure has no resemblance whatsoever to Nature's processes for there is no place within wave mechanics for it to fit into. This universe consists solely of waves of motion. Any theory which cannot find a fitting place within the wave has no other place for it in Nature. The present-day concept of atomic structure is based upon concentric shells, one within the other, which become the basis for revolving electrons placed according to formula upon those shell strata. Centering these geocentrically and geometrically placed electrons are nuclear groups of separately-and-oppositely-charged protons and photons. By adding one electron to an outer shell, an element next in number is produced. Conversely it, is believed that if one electron could be knocked out of an element, such as mercury, the next succeeding element - gold could be produced.

Insofar as Natural Law is concerned, one might as well say that if one of the children of a French family dies, it would change the family's nationality to Italian." [Russell, A New Concept of the Universe]