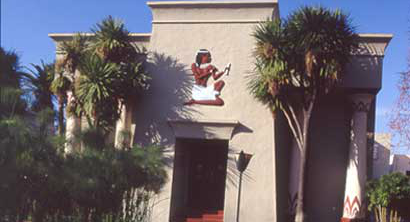 There are many organizations using the term "Rosicrucian". They are not the same organization nor are they the same in intent, purpose and activity.

Commemorating the Centennial of the foundation of the Ancient and Mystic Order of the Rose-Cruz
On Thursday, April 1, 1915, a thirty of the most active members gather on 1th Avenue in New York City, at a local soon to be the first AMORC Rosacruz Lodge.
To achieve this, in the period between 1909 and 1912, Harvey Spencer Lewis prepared for the revival of the Rose-Cruz order.
At that meeting, May Banks-Stacey delivers solemn delivery to Harvey Spencer Lewis, of documents she had received on her trip to India. The governing body of the Order, the Supreme Council, is formed immediately and proceeds to the election of the Grand Master General and Imperator. According to the wishes of May Banks-Stacey, Harvey Spencer Lewis chosen unanimously. Assembly signs illuminated letter that had been drafted in the winter of 1913-1914. This document, dated April 1, 1915, proclaims the birth of AMORC and the authority of its Supreme Council in the United States. It is important to note that while this document is signed by its founder, it is also the work of numerous collaborators. Among them, Martha Lewis, Thor Kiimlehto, Alfred E. Saunders, William B. Hodby, Georges Robert Chambers, Conrad H. Lindstedt, Albert B. Brassard and many more.

The magic of secrecy
“Those who refuse to affiliate with anything that is of a secret nature do so because they feel that knowledge, if it is worthwhile, should be given freely to the world. They ask, “If the knowledge taught is good and will uplift humanity, why then is it kept secret from all except those who are initiated?” In my answer lies the positive proof that such a question is asked only by those who are not willing to make some conscious effort for what they would receive.
The answer is simple: The majority of people will not take the time, thought, and conscious effort necessary to pierce the veil and disclose the great truths. “There is a Key,” they cry; “a Key we must first have before we may understand.” Even so, there are many books readily obtainable which contain the keys, but where are the multitudes who thereby obtain the keys? Lecture after lecture is written on the Bible, delivered, and published, but how many seekers attend or read such lectures?
Take that secret organization known as Freemasonry, for example. It is claimed that Masonry contains many laws and principles which are kept secret and revealed only to its initiates. Not being a member of this august fraternity, I do not know just what it contains or what it reveals, but it is evident that it must hold and reveal something worthwhile, else it would not be the powerful organization we know it to be. However, if Masonry held every law and principle, if it revealed ways and means whereby its members could use such knowledge so as to perform so-called miracles, and so on, it would be of no avail to scatter its knowledge to the world; for in such case the multitudes would listen, expecting something very wonderful, and not being prepared to receive the great truths in their simplicity they would turn aside.
Take, again, the Rosicrucians—known to possess and teach so many of the secret laws and principles which, once known and put into practice, enable people to live as their Creator intended. What if this great fraternity should scatter its teachings broadcast, give them openly and freely to all the world? Few, indeed, would listen; fewer would understand; and fewer yet would put them into practice and thus reap their benefits. Yet the Rosicrucian teachings are not hidden; they are accessible to all who ask with a sincere heart. Why, then, do not the majority who seek truth take advantage of these teachings? Simply because they must give of their time and energy in order to absorb and understand such teaching, and that is what they will not do,
[Harvey Spencer Lewis, FRC] “The Magic of Secrecy” in Master of the Rose Cross (2009)

Keely
"Science admits that nature works with dual force, though at rest she is a unit. "Nature is one eternal cycle." Keely's discoveries prove that the doctrine of the Trinity should be set down as an established canon of science - the Trinity of force. All nature's sympathetic streams - cerebellic, gravital, electric and magnetic - are made up of triple currents. The ancients understood this dogma in a far deeper sense than modern theology has construed it. The great and universal Trinity of cause, motion and matter - or of will, thought and manifestation - was known to the Rosicrucians as prima materia. Paracelsus states that each of these three is also the other two; for, as nothing can possibly exist without cause, matter and energy - that is, spirit, matter and soul (the ultimate cause of existence being that it exists), we may therefore look upon all forms of activity as being the action of the universal or Divine will operating upon and through the ether, as the skilled artificer uses his tools to accomplish his designs; making the comparison in all reverence." [Bloomfield-Moore, More Science]