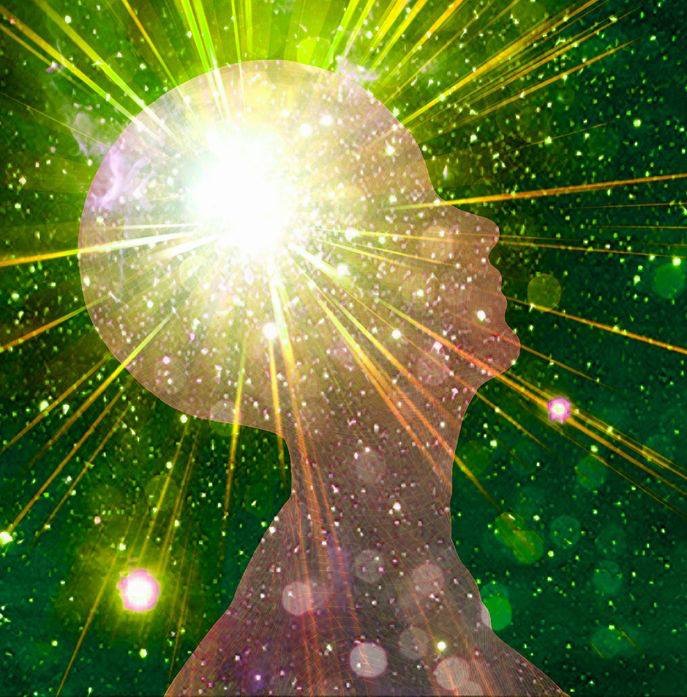 "The speculations of the physicists of the present age (1892), in regard to latent energy, would neutralize the sympathetic conditions that are associated with the governing force of the cerebral (brain) over the physical organism. The evolution of a thought, the infinite exciter, arouses the latent energy of the physical organism to do its work, - differential orders of brain-force acting against each other under dual conditions. If there were no latent energy to arouse, sympathetically, there would be no action evolved on the physical mass, nor on any other, as all force is mind force. All evolutions of latent power, in its varied multiplicity of action, induced by its proper exciters, prove the connective link as between the celestial and the terrestrial, the finite and the infinite." (Keely)

The sympathetic influence of the terrestrial envelope gets its introductory impulse from the infinite depths of the earth's neutral center. This impulse radiates in undulating lines far enough into etheric space to become sympathetically associated with the etheric (or Infinite) under the same conditions that associate the mental with the physical organism of man. We can define man's molecular condition in its physical organism as the earth, and its connective link with the convolutionary cerebral centers as the Infinite etheric space, the same conditions of governing rule as exists between the mental and physical forces.

With this medium it is plain to see how simply God works, as well as mysteriously, His wonders to perform, the mental forces kept vitalized from the great storehouse of the etheric realm, and in controlling the physical the deficit caused thereby renewed and kept balanced by the power of its sympathetic concordant receptiveness.

Any visible molecular mass of metal can be impregnated by triple orders of sympathetic vibration as to give it the same sympathetic transmissive qualities that exist in the mental forces, which make such mass subservient to either the attractive or repulsive conditions of terrestrial sympathy.

Gravity is nothing more than a concordant attractive sympathetic stream flowing towards the neutral center of the earth. This force is inherent in all visible and invisible aggregated forms of matter, from the very birth of a planet, around whose center the molecules cluster by the sympathetic affinity which is thus induced. If these conditions had always maintained a neutral position in etheric space, no planet would ever have been evolved. These conditions have been fixed by the Infinite. These rotating neutral centers, set in celestial space, have been endowed with the power of rotation to become their own accumulators. It is through the action of these sympathetic forces of the Infinite etheric realm that planets are born, and their volume of matter augmented.

"If we pick up an object we feel a resisting power in it which physicists call gravity; but they do not explain what gravity is. It is simply a sympathetic flow, proceeding from the molecular centers of neutrality; which flow is concordant with the earth's neutral center of same, seeking this medium of its affinity with a power corresponding to the character of its molecular mass. There is no actual weight in the molecules of the mass of which the earth is composed. If the sympathetic negative polar stream that flows towards the neutral center of the earth were cut off from it, the earth's molecular mass would become independent, and would float away into space as would a soap bubble filled with warm air.

"The gravital flow comes, in this system, under the order of the sympathetic concordant of the 9ths, and belongs to that third of the triune combinations called polar propulsive.

"Both magnetism and gravity can be accelerated by the proper medium of sympathetic vibratory influences."

"If we take into proper consideration the sympathetic affinity that exists between the centers of the cerebral convolutionary organism, and the polar terrestrial forces, as linked to the celestial, or Infinite, the harmonizing effects they have on the normal brain, and the antagonistic negative bombardment of these streams on the abnormal one, is it not possible, by the diversion of pure, sympathetic streams, to antagonize abnormal conditions, by concordant or magnetic polar sympathetic mechanical exciters, and thus to induce pure normal equilibrium of its corpuscular mass? Which means perfect mental restoration.

At the present time Keely is concentrating his efforts on the perfecting of his mechanical conditions to the point where, according to his theories, he will be able to establish, on the ninths, a sympathetic affinity with pure, polar negative attraction, minus magnetism. In his own opinion he has so nearly gained the summit, or completion of his "graduation" as to feel that he holds the key to the control of the infinitely tenuous conditions which lie before him to be conquered, before he gains mastery of the group of depolar disks that he is now working upon. Twenty-six groups are completed, and when the twenty-seventh and last group is under equal control, Keely expects to establish a circuit of vibrating force, for running machinery, both for aerial navigation and for terrestrial use. If this result be obtained, Keely will then be in a position to give his system to science, and to demonstrate the ever-operative immanence of the Infinite builder of all things..." The Snell Manuscript