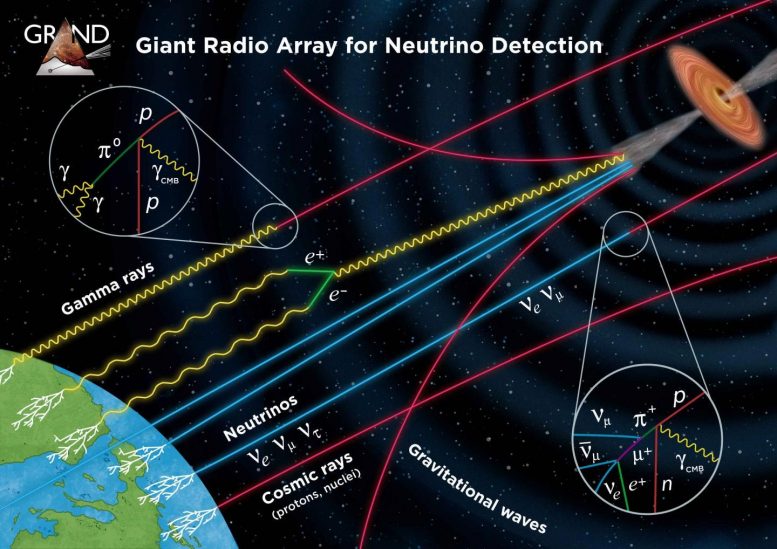 A zero-mass uncharged particle emitted in the process of beta decay. [Trefil, James S.; From Atoms to Quarks - An Introduction to the Strange World of Particle Physics; Charles Scribner's Sons, New York, 1980]

"MIT physicists have found that subatomic particles called neutrinos can be in superposition, without individual identities, when traveling hundreds of miles. Their results, to be published later this month in Physical Review Letters, represent the longest distance over which quantum mechanics has been tested to date.

The team analyzed data on the oscillations of neutrinos - subatomic particles that interact extremely weakly with matter, passing through our bodies by the billions per second without any effect. Neutrinos can oscillate, or change between several distinct "flavors," as they travel through the universe at close to the speed of light." Subatomic Particles "Maintain Ghostly, 'Neither-Here-Nor-There' Identity as They Travel Through Universe"

The long-sought, elusive ultra-high-energy neutrinos, ghost-like particles that travel cosmological-scale distances, are key to understanding the Universe at the highest energies. Detecting them is challenging, but the Giant Radio Array for Neutrino Detection (GRAND), a next-generation neutrino detector is designed to find them.

A decades-old mystery: where are the most energetic particles coming from?

A major open question in astrophysics for the past fifty years has been the origin of the most energetic particles known to us, the ultra-high-energy cosmic rays (UHECRs). These are electrically charged particles — protons and atomic nuclei — of extraterrestrial origin. Their energies are millions of times higher than those of the Large Hadron Collider.

The most energetic UHECRs have energies of 1019 eV or more. This is about the kinetic energy of a football (soccer ball) kicked by a professional player, concentrated in the size of an atomic nucleus. UHECRs are likely made in powerful cosmic accelerators — like active supermassive black holes and supernovae — located outside the Milky Way, at distances of a few Gigaparsecs (109 parsec ~ 1013 km), in the far reaches of the observable Universe. However, despite our efforts, no individual source of cosmic rays has been identified so far. https://scitechdaily.com/solving-mystery-of-ultra-high-energy-ghost-like-particles-with-next-generation-neutrino-detector/