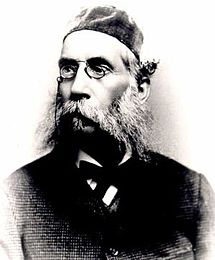 
Horace Parnell Tuttle (March 17, 1837 – August 16, 1923) was an American astronomer and inventor, an American Civil War veteran and brother of astronomer Charles Wesley Tuttle (November 1, 1829 – July 17, 1881).
Tuttle lived in the Washington, D.C. area from about 1884 until his death from "pulmonary edema" in 1923. In his final years he was feeble and blind from a fall in November, 1921. His gravesite is unmarked and its location in Oakwood Cemetery, Falls Church, is unknown. Wikipedia, Horace Parnell Tuttle

Bloomfield-Moore
"Tests were made last year by Dr. Koenig and Dr. Tuttle, a Baltimore physicist, in the presence of other men of science with the most sensitive galvanometer belonging to the University of Pennsylvania, all of whom were satisfied that no known force had been detected." [Progressive Science], [Eye Witness Accounts]