Sympathetic Vibratory Physics » 01 - The origin of a Musical Sound

01 - The origin of a Musical Sound

Introductory: The Origin of a Musical Sound.

It must be evident to every one, that the cause of the sensation we term "sound," is something external to us. It is almost equally obvious that this external cause is motion. To be convinced of this fact, it is only necessary to trace any sound to its origin; the sound from a piano, for example, to its vibrating string, or that from a harmonium to its oscillating tongue. If the glass bell (figure 1) be bowed, it will emit a sound, and the little suspended weight will be violently dashed away; the rattle of the moving glass against the projecting point will also be plainly heard. Even where the movement cannot be seen, as in most wind instruments, it may easily be felt. 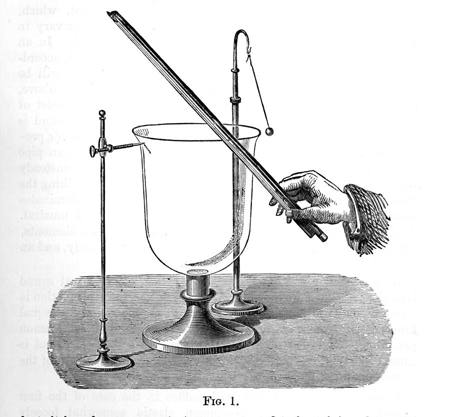 
Although all sounds are thus produced by motion, movements do not always give rise to the sensation, sound.

We have therefore to ascertain, what particular kind of motion is capable of producing the sensation, and the conditions necessary for its production. Sounds may be roughly classified as musical or unmusical. As we are only concerned here with the former, it will be as well first to distinguish as far as possible between the two classes. For acoustical purposes, we may define a musical sound to be that, which, whether it lasts for a long or short period of time, does not vary in pitch. In other words, a musical sound is a steady sound. In an ordinary way, we say that a sound is musical or unmusical, according as it is pleasant or otherwise, and on examination, this will be found to agree fairly well with the more rigid definition above, especially if we bear in mind the fact, that most sounds consist of musical and unmusical elements, and that the resulting sound is agreeable or the reverse, according as the former or the latter predominate. For example, the sound produced by an organ pipe consists of the steady sound proper to the pipe, and of the unsteady fluttering or hissing sound, caused by the current of air striking the thin edge of the embouchure; but, as the former predominates greatly over the latter, the resulting sound is termed musical. Again, in the roar of a waterfall we have the same two elements, but in this case, the unsteady predominates over the steady, and an unmusical sound, or noise, is the result.

We have just seen that the external cause of a musical sound is motion; we shall further find on examination, that this motion is a periodic one. A periodic motion is one that repeats itself at equal intervals of time; as, for example, the motion of a common pendulum. In order to satisfy ourselves that a musical sound is caused by a periodic motion, we will examine into the origin of the sounds produced by strings, reeds, and flue pipes.

A very simple experiment will suffice in the case of the first named. Stretch a yard of common elastic somewhat loosely between two pegs. On plucking it in the middle, it begins vibrating, and although its motion is somewhat rapid, yet we have no difficulty in counting the vibrations; or at any rate, we can see that they follow one another regularly at equal intervals of time. Further, we may notice, that this is the case, whether we pluck the string gently or violently, that is, whether the vibrations are of large or small extent. The motion of the string is therefore periodic, - its vibrations are all executed in equal times. If now the elastic be stretched a little more, the vibrations become too rapid for the eye to follow. We see only a hazy spindle, yet we cannot doubt but that the kind of motion is the same as before. Stretch the string still more, and now a musical sound is heard, which is thus caused by the rapid periodic motion of the string.

A similar experiment proves the same fact with regard to reed instruments. Fasten one end of a long thin strip of metal in a vice (figure 2). Displace the other end (d) of the strip, and let it go. The strip vibrates slowly enough for us to count its vibrations, and these we find to recur regularly; that is, the motion is periodic. Gradually shorten the strip and the vibrations will follow one another faster and faster, till at length a musical sound is heard. Although we cannot now follow the rapid motion of the strip, yet, as in the case of the string above, we may fairly conclude that its character remains unaltered; that is, the motion is still periodic. 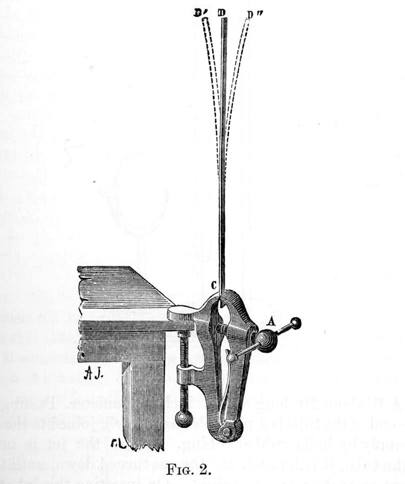 
In such an instrument as a flue pipe, the vibrating body is the air. Although this itself is invisible, it is not difficult to render its motion visible. Fixed vertically in the stand (figure 3) is a glass tube A B, about 2 foot long and an inch in diameter. Passing into the lower end of the tube is a pin-hole gas jet, (f), joined to the ordinary gas supply by india-rubber tubing. Before the jet is introduced into the tube, it is ignited, and the gas turned down, until the flame is about an inch or less in height. On inserting this into the glass tube, after a little adjustment, a musical sound is heard coming from the tube. It is, in fact, the well-known singing flame. The particles of air in the tube are in rapid vibration, moving towards the centre and from it, alternately. The air particles at that part of the tube, where the flame is situated, will therefore be alternately, crowded together and scattered wider apart; that is, the pressure of the air upon the flame will be alternately greater and less than the ordinary atmospheric pressure. The effect of the greater pressure upon the flame will be to force it down, or even extinguish it altogether; the effect of the lesser pressure will be to enlarge it. Thus the flame will rise and fall at every vibration of the air in the tube. These movements of the flame are too rapid, however, to be followed by the eye, and the flame itself will still appear to be at rest. In order to observe them, recourse must be had to a common optical device. First, reduce the tube to silence, by lowering the position of the jet. Having then darkened the room, rotate a mirror (M) on a vertical axis behind the flame. The latter now appears in the mirror as a continuous yellow band of light, for precisely the same reason, that a lighted stick, on being whirled round, presents the appearance of a luminous circle. Now restore the jet to its former position in the tube. The latter begins to sing, and on rotating the mirror we no longer see a continuous band of light, but a series of distinct flames (o p) joined together below by a very thin band of light. This clearly shows, that the flame is alternately large and very small; that is, alternately rising and falling, as described above. Now while the mirror is being rotated at an even rate, notice that the intervals between the flames are all equal, and also that the flames themselves are all of the same size. From what is stated above, it will be seen that this proves our point, namely, that the sound in this case is produced by the periodic or vibratory motion of the particles of air. 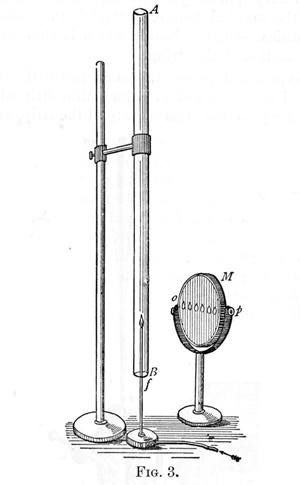 
By examining in this way into the origin of other sounds, it will be found that all musical tones are caused by the periodic motion of some body. Further, a periodic or vibratory motion will always produce a musical sound, provided, (1), that the vibrations recur with sufficient rapidity; (2), that they do not recur too rapidly; (3), that they are sufficiently extensive, and the moving body large enough. The following experiments will illustrate this. 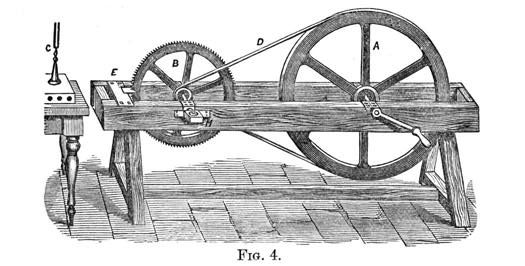 
Figure 4 represents an ordinary cogwheel (B), having some 80 or 90 teeth, which can be rapidly rotated by means of the multiplying wheel (A). Holding a card (E) so as just to touch the cogs, we slowly turn the handle of the multiplying wheel. The card is lifted slightly by each cog as it passes, but is almost immediately released, and falls back against the succeeding one; that is, it vibrates once for every cog that passes it. As long as the wheel is revolving slowly, the card may thus be heard striking against each cog separately. If, however, the speed be increased, the taps will succeed one another so rapidly as to coalesce, and then a continuous sound will be heard.


The well-known Trevelyan's rocker is intended to illustrate the same thing. It consists of a rectangular-shaped piece of copper about 6 inches long, 2 1/2 inches broad, and 1 inch thick. The lower side is bevelled, and has a longitudinal groove running down the middle, as shown in figure 5. Attached to one end is a somewhat slender steel rod, terminating in a brass ball. If we place the rocker, with its bevelled face resting against a block of lead, and with the ball at the other end resting on the smooth surface of a table, it will rock from side to side on being slightly displaced, but not quickly enough to produce a musical sound. If, however, we hold the rocker in the flame of a Bunsen burner, or heat it over a fire, for a few minutes, and then place it as before against the leaden block, we shall find it giving forth a clear and continuous sound. This phenomenon may be explained thus: - When any point of the heated rocker on one side of the groove touches the lead, it imparts its heat to the latter at that spot. This causes the lead at that particular point to expand. A little pimple, as it were, darts up and pushes the rocker back (figure 6),


so that it falls over on to the other side of the groove. A second heat pimple is raised here, and the rocker is tilted in the contrary direction, and thus the motion is continued, as long as the rocker is sufficiently hot.

The cause of the sensation sound, is motion.
A musical sound is one which remains steadily at a definite pitch.
A musical sound originates in the periodic motion of some body.
A periodic or regular vibratory motion will always give rise to a musical sound, if the vibrations recur with sufficient, but not too great rapidity, and provided they are extensive enough.

Return to Part 26 - Science of Sound, Vibration, Acoustics and Music