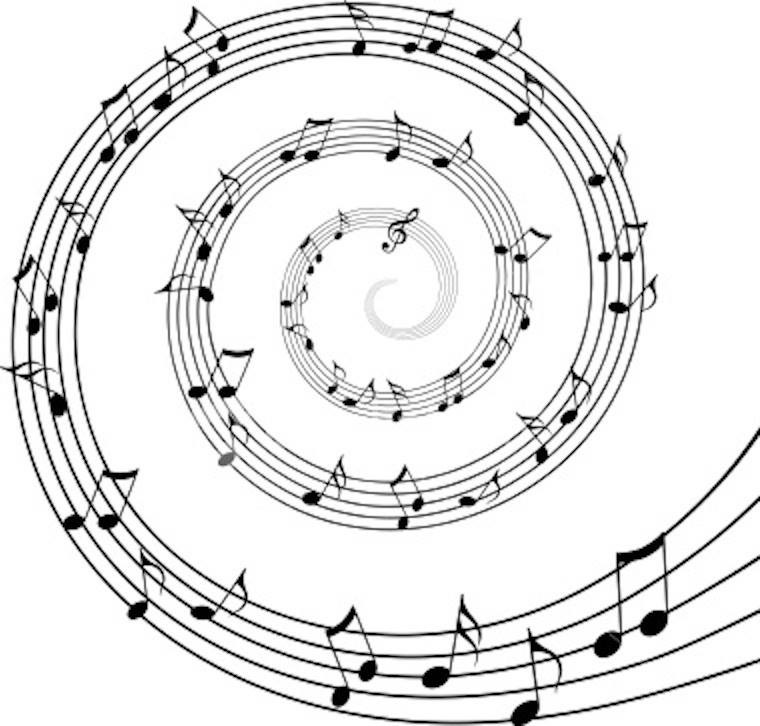 "Question: "By what term shall we define that force which, when differentiated, expresses itself on the lower planes of manifestation as charity, self-forgetfulness, compassion, and the tendency of all illuminated ones to association in universal brotherhood?"

"Keely's reply: "I hold that ONE SUPREME FORCE, which we may term the incomprehensible, holds within itself all these sublime qualities, as an octave embraces its many tones. This force expressed in the human organism, has what may be termed CONCORDANT CHORD-SETTINGS dominated by one or other of the above-named differentiations of this supreme force."

"Now let us ask what makes human beings differ the one from the other. The reason we give for this striking natural phenomenon is that in one individual these chord-settings are allowed full amplitude in action, while in others they are suppressed, and by suppression rendered latent. To illustrate: we will picture a beggar asking alms of a richly dressed gentleman, who passes by entirely oblivious of the suppliant's needs; but here the wonderful law of sympathetic action intercedes, making the wealthy individual comprehend the necessitous condition of the pauper.

"At this point the ego enters the chamber of the ordeal; here, in commonplace life, in everyday surroundings, man is tried; this is initiation.

''"The well-to-do man goes on his way, not caring to stop, hurried perchance by the urgency of worldly affairs; the chord-setting representing that differentiation of infinite force called by us compassion, acting upon its concordant chord-setting, loudly proclaims to the ego what is right action, and the opportunity passing when it should be seized, powerfully exerts its force against the will of the personality that would suppress its action. 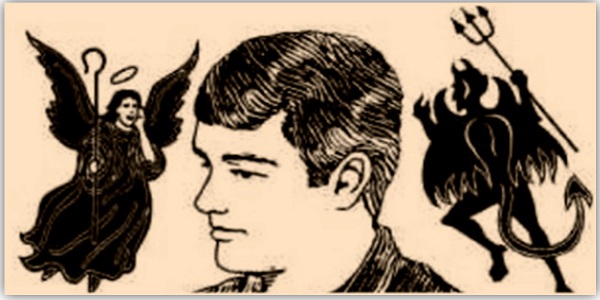 It is a Choice
(courtesy artist unknown)
(click to enlarge)

"Here is where the battle is fought; simple though the illustration may appear, it forcibly sets forth the actual conflict continually waging between divine wisdom and mortal error, carelessness, and ignorance.

"The man of wealth and position goes on, perhaps, for some distance, the battle all the while continuing; finally, he stops and turns back, he yields to the dominating influence of that chord-setting; he gives the beggar alms and goes on his way with the skies bright above him; he has won a battle he will not have to fight again. Understand that victory is won, not by the giving of alms, but by yielding to that divine force-differentiation. If this chord-setting had not retained its dominance, it would only require a few instances of the above type to render it latent, and when latent the person is no longer amenable to influences calculated to arouse compassion. In like manner, other centers may be rendered latent by repeated suppression, until we find a person so dead to all appeals from the various chord-settings that his whole course in life is represented by the sum-total of the antagonisms internally produced; results proving this are seen everyday.

"You ask why do people commit such blunders and perform such acts as they do, all the while seemingly unable to help themselves.

"The reason is that they have rendered latent these centers which otherwise would have given them the power to rightly control their deeds instead of being, as they now are, dominated exclusively by the forces of aggregated matter which we usually call the self-will (ego) of the outer personality, as distinquished from the distinctly humane individuality which always responds to a divine appeal.

"It can be readily seen from this example that a man can mould himself practically as he chooses; though he may have to encounter many obstacles erected by himself in past periods of earthly existence, as he comes to earth anew with these chord-settings latent, or developed to the extent they were so, at the conclusion of his earth-embodiment; a man has therefore only to carefully examine the condition of these settings to learn whether they are latent or developed; if latent, he knows well that if he yields to the dominance of the chord-settings of the supreme force - and he needs no monitor other than these to instruct him, their voice being loud-toned, full, strong, deep, and high - to carry him on to the consummation of his highest ideal, their suppression leading him to the lowest condition in which we behold that section of humanity which is dominated by the action of the blind forces inherent in aggregated matter, - forces which are at all times powerfully and intimately associated with everyone who possess a material body.

"The work of arousing to activity the latent chord-settings is sometimes equivalent to giving birth to an entirely new condition in the person, the intellect and the imagination having to actively cooperate in the endeavor to produce even the minutest degree of activity.

"In such persons their hardest experiences may be the greatest benefit to them, if rightly taken; for it is through certain orders of experience - not unattended with suffering - that these centers are powerfully acted upon. The foregoing illustrations of the merchant and the beggar introduces one in whom the action of the centers is to a certain degree active.

"In experiences where the emotions are intensely aroused their action is far greater, and we may see the result of the conflict, in the event of a person of hitherto unnoticeable traits being developed either into a person of crabbed, irritable disposition or into one of considerable moral beauty and attractiveness, and all because a center hitherto dormant has been powerfully aroused or more completely suppressed.

"Who knows but that all the varieties of disposition we see expressed every hour in the persons of those about us is due to HABIT; in the case of the sweet and lovable, to the habit of constant yielding to the dominance of what we may term super-celestial force, while on the other hand, the sour and morose are but the suffering victims of their own habitual suppression of these same divine centers of radiation, which are continually dispersing the divine energy focalized upon them throughout the eternal ages of unwasting life.

"Concerning circumstance let it be most emphatically stated that they never need be permitted to suppress the upward tendencies of our nature; that they have, like all experiences, and opportunity contained within them, to act either for the more perfect dominance of the celestial or the terrrestrial, none need deny; but it rests wth every individual to embrace or reject opportunities as he will, to accept the honors of initiation or undergo the regrets consequent upon failure.

"Only the keen, sensitive soul can understand when these opportunities come and go, for only such have won this right by successive victories gained through yielding to these celestial streams of force, and the conqueror over himself is the victor always, though he may seem sometimes to yield obedience to a force greater than himself. Let the supreme desire of each one of us ever be that these resonating centers, permanent throughout measureless cycles of time, graduated by the all-wise builders of the universe to perfect concordance with the Divine Force which is in essence incomprehensible, - shall vibrate to fullest amplitude of action; so shall we each escape from the pains, sorrows, and disappoinments associated with their suppression and inevitably resulting from it." Dashed Against the Rock