Sympathetic Vibratory Physics » 18.18 - Awakening is the Essense of Religion

18.18 - Awakening is the Essense of Religion


"Let this mind be in you, which was also in Christ Jesus." Philippians 2:5. Many of us have been taught to dislike religions. There may be a good outcome in that. Dr. Phineas P. Quimby hated religions claiming they mistaught humanity which teachings brought much suffering because of their effects on people's bodies and lives through their Minds. However, the essence that is religion - the Awakening process is much to be desired and has been sought by countless students, cheelas, monks and others for many centuries. In short Awakening means having full access and use of Consciousness not limited by (mis)beliefs. The Awakened Mind is a Whole Mind and not the split or fragmented Egoic or Intellectual Mind. Buddha and Jesus were two in history who attained this much desired state of Whole Mind and Consciousness. We can attain this state of Mind and humanity's religions were or began as nothing more than methodologies to attain such a desirable state of mind. That some self-centered power-mongers modified those efforts into religions to attain personal, political and worldly aims were bastardizations of the original purposes and ideals of personal development of Mind and Consciousness. What we see today as religions bear little resemblance to their original purposes and ideals. Some forms of religions we have now are little more than brain-washing dogmas and doctrines focused on splitting meanings of words and phrases but still based on beliefs by some person or other. A Whole Mind is a peaceful, serene, creative Mind which bears out in one's life as a peaceful, joyous, serene and constructive life. If a person's outer life is chaotic or deconstructive then we can know their inner thoughts are the same and are causing the outer. 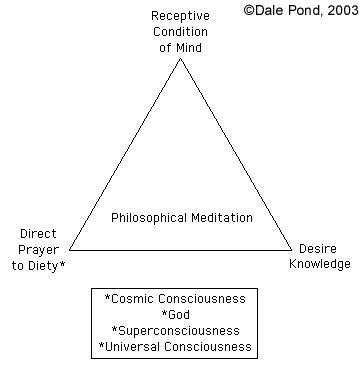 
"For, none may tell another how to be beautiful. It must be the reflection of that entertained in the heart and mind of the individual. And as He is beauty, He is friendship, He is love, the more and the nearer individuals reflect that in their conversation, in their dealings with their fellow man, the greater the glory to Him." Cayce (2574-1)

18.18 - Awakening is the Essense of Religion
All Sound Religion
As a Man Thinketh
Awakening
Awakening and Free Energy
Belief
Buddhism
Christ
Christ Consciousness
Dogma
Four Steps to Awakening
Genius
God
I Am
Mind
Relationships
Religion
Superconscious
Totality of You